Episode 11 of the second series of Samuel In Dolgnwot is here…and as they say, better late than never.

In this episode we see Samuel heading back to Canberra, and stopping by a sign which points to both Dolgnwot and Canberra 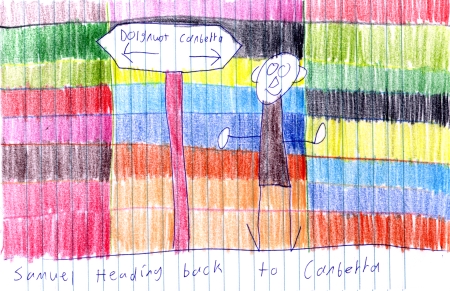 But did Lawsie get the fabled Golden Microphone?

Does it equate to the Golden Fleece?

Is Samuel in fact a modern day mythical Jason leading his band of Argonauts through a series of perilous adventures, with only coffee to sustain them?

Why does Black and Gold coincide not once, but three times in this instalment?

Why am I typing this sitting on three tins of 825 gram Black and Gold pineapple pieces, stacked on top of one another, Dolgnwot style?

Too many questions left unanswered heatseeker. Just like the Matrix sequals. It just can’t end like this.

Extremely thin pickings this week. I can’t believe we had to wait two weeks for this simple exposition of logistical concerns.

And anyway, I question the continuity of this episode? Did Samuel not venture back to Dolgnwot in a 16-wheeled house? Where is the house now? And if the house remains in Dolgnwot, will Samuel walk back again or use an additional mode of transportation?

And how could he turn his back on Johnboy trapped down the well when he only so recently affected reconciliation? Did he simply drop a few tins of 825 down the well and hope that would tide Johnboy over?

I think Heatseeker’s Argonauts theory is interesting. I was going to add to it by suggesting he is also a Jacob & The Coat of Many Colours (who you might remember from such Sunday School classes as Honey, My Brothers Threw Me Down Into A Pit & Left Me for Dead). However, Samuel appears to be wearing only a greyish, roughly-sewn cassock of some kind. Could he be travelling incognito for some reason?

I have to say I am growing frustrated at the pace with which things are moving. I sense that the dark forces at work behind Dolgnwot, eminating from subterraenian catacombs somewhere in Reid are drawing back.

Are we getting too close to the truth? Chuck, have you noticed any signs you’ve been probed, Jones style?

I also think it is unclear fromt this episode which direction Samuel is heading. Dolgnwot or Canberra?

Unless of course people walk sideways crab-style in Dolgnwot. Or he is simply pausing for a moment to have his portrait painted.

Personally I think Samuel is having a crisis of concience about the Johnboy/Caravan-House/well situation.

I had taken myself to bed wrapped in foil after Chuck’s warning about viewing the Dolngwot series without appropriate protection. I’m afraid my paranoia reached a peak just prior to the release of episode 11 and I had to be medicated to contain my excitement.

It was all in vain though as I am still completely unable to discern anything at all in the rendering. Should I get 3D specs?

As I type HMV I am replicating Warhol’s Factory by getting one of its ‘freaked out’ inhabitants to cover the inner walls of my home in B&G tin foil.

Quite often I have awoken on a par 3 green with Dolgnwot tattooed in Aremaic scrawl over my bodice after viewing Dolgnowt with 3D glasses on. Take the chance if you must but make sure there is a laser removal clinic within walking distance.

Chuck is right. 3D glasses are far too great a risk. The shock of colour and dimension is often so great it can cause the viewer to ‘lose time’, often waking in a disoriented state, tightly wrapped in foil, and usually in a garden of some kind.

Some have likened the experience to that of Frodo when he put the Ring of Power on his finger. A strange new portal or dimension is opened up, Say-tanic voices can be heard and when it’s all over, there you are in some strange garden (or in Chuck’s case, a golf course), none the wiser.

My advice to you is to tear off a small square of B&G foil and hold it up next to the Dolgnwot image. The biomechanic structure of the foil should protect you from any supernatural radiation eminating from the picture, while you can get a better perception of depth by looking into the reflection.

I’m beginning to see a convergence of ideas throughout this blog which initially escaped me – as a novice reader.

I sense that the images, such as the Dolgnwot series and the photograph of the pregnant gentleman with the megaphone are subtle clues to something I can’t quite grasp as yet. But the pattern is beginning to emerge.

I’m sure long term readers are seeing things I am yet to glean but are the striations of colour arranged according to a mathematical equation? I have scanned them with a bar code reader and found that the price of a can of Black & Gold Baked Beans is only 88 cents but I fear this is too pedestrian a clue for the complexities at play here.

Am I on the right track? I will heed your warning of the use of 3D spectacles and will save them for replays of Friday the 13th Part 3, a much less complicated arrangement of ideas.

I am out of B&G foil, having lined my bedchamber with it, so I will not risk a further examination until I can accord myself the appropriate safeguard.

HMV, we’ve tried everything. Fractal maths and chaos theories have been applied to no avail, numerology was applied some time ago by heatseeker, with little discernable result, and a super computer has been used to attribute each possible shade of colour with a letter, but all it did was spit out a small stripe of tickertape which read ‘The Skivvy Is Yellow’, which only complicated things even further.

And this does not even touch of some of the other theories, both Christian and occult, that have been put forward.

What this whole question really needs is a fresh pair of eyes.

Can you help before it’s too late, HMV?

Can anyone suggest where I may pick up a fresh pair of eyes?

I can get you a toe by 3 o’clock. With nail polish.

I am in the process of investigating the connection of rap music and Dolgnwot.

So far I have come up with:

samuel gordon stewart got tha gold on his hands, drop it

feeling fine, hangin with my homies in reid

but those cursin muthas gonna end up in the garden

SPEED aint got no NEED to rhyme Greed with Heed

And that’s all I’ve got. Chuck, maybe you can take this baton and mix something up for the album.

Ahh, cunning. Work with me!

Ok. I apologise for that outburst. I work 10 hours a day six days a week, and my commute is an hour each way. Saturday night is the night I fling aside the neck tie, slip into a pair of trackies and a purple skivvie, mix myself a saucy potato-liquor drink, and, apparently, write bad hiphop lyrics.

“Purple evokes gloom and sad feelings. It can cause frustration.”

Try a yellow skivvy. But not black. Black will make you look like Frank Thring.

Wonko, I hope you haven’t been getting up any sheer naughtyness in your posting!

wonko, were you kindly testing a fresh pair of eyes for me?

I’m afraid my eyes are of little use to me now, HMV. I was the victim of a high-school science class prank dubbed the ‘ocular knock’. This involved creeping up on another student while they were examining a cross section of grass under a microscope and rapidly turning the large knob so it would strike them in the eye.

My attacker was suspended but my eye has never fully recovered. So I now ‘see’ by a computer which translates colours from Dolgnwot episodes into superintelligent clouds of gas, which I breath through special nostril appartis.

It’s a experiment field, and I keep winding up with satanic death-metal strip clubs rather than my workplace, but I have a good B&G suit to keep any harmful vibes at bay.

So maybe you’ll have to source and test your own eyes from here on in, HM.

On the contrary, I think Wonko’s bustin rhymes are a clue to rise to notoriety of rapper 50 cent and the global success of series two of Samuel in Dolgnwot. Both are inextricably linked. In an interview given to Rolling Stone, 50 cent alluded to patchwork colours of a certain Canberran artist corresponding to his bitchin’ meter and rhyme. While saying this he smiled revealing a set of silver chops. Juxtaposed to this was his golden bling bling set a background of his skin colour.

I can only come to this conclusion.

50 cent has listened to Persiflage backwards and unwittingly has become a convert to the satanic messages contained within. In an attempt to keep the secret to the true meaning of Dolgnwot safe, he has covered the covered his teeth in B&G tin foil. His use of bling bling set against his black skin is a subliminal nod to his dark master who is Samuel. In other words he is saying ‘I only buy Black and Gold and so do my fans’.

Don’t apologise for your outburst Wonko. You have just viewed Dolgwnot’s patchwork style for two long and your outburst is the equivalent to Linda Blair’s head turning 360 degrees and spewing pea soup all over the set.

My Samantha goes cross eyed when she’s drawn to Dolgnwot … it has powers the unenlightened will never comprehend.

I am a little put off by the hideous eyeless gaze of Samuel in this installment. Are the pupils merely rolled back in the read as a precaution against the vivid world of Dolgnwot, or has Samuel been bitten by a zombie?

I find it somewhat odd.

I am also seeing shades of Robert Johnson (?) who was confronted by the Devil at a set of crossroads, and entered into an agreement to exchange his soul for amazing guitar playing abilities.

Can Samuel play guitar (or violin, The Devil Went Down To Georgia style?), and can you offer any assurance no bargain with the devil was made with Methusilah?