It’s the mystery that has had the nation on tenterhooks all week, the mystery of what will happen to the golden microphone. National speculation has varied wildly, with some saying Samuel would turn in to John Laws, whilst others have been speculating that Samuel would give it to Lawsie, and there was even some speculation that the golden microphone would follow real life events and Brian Henderson would give it to Lawsie. Episode 10 of the second series of Samuel In Dolgnwot is here to answer the question.

In this episode we see Samuel having coffee with Brian Henderson, and Samuel giving Brian the golden microphone so that he can give it to Lawsie for his 50 years of broadcasting, a task which Brian is more than pleased to carry out. 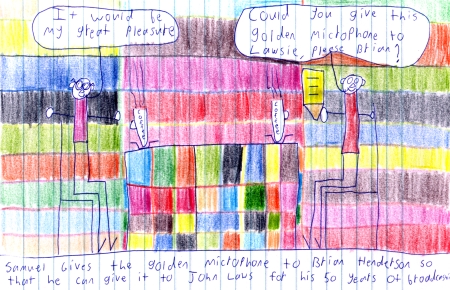 That’s all I need. Brian doing a Sharon Stone this early in the morning.

I did not know episode 10 would be revisionist in content. I have to admit that I am a little confused. I was sure that Lawslie’s golden microphone was either made from gold from the teeth of WW2 victims or from a burglary of bullion from Packer’s office.

Don’t get me wrong, I am very excited about Brian making an appearance and passing the chalice onto Lawslie. It’s just that I woke up this morning on the par 3 green of Kingston Heath Golf Club with ‘Dolgnwot’ tattooed on my forehead and a box of Derwent pencils strapped to my torso.

It is a possibility that I have also been probed and drugged as my memory of the night is foggy.

Yes Chuck, I also sensed a strange shift in the Matrix last night as this latest instalment went to air.

It looks to me like Samuel is trying explain away his pivotal role in Lawsie’s heist of the Packer gold … personally, I would have thought it would have been a nicer touch if the Dolgnwot Samuel could have presented the Golden Microphone to Lawsie personally.

However, I would also liked to have seen Alan Jones presented with the Golden Microphone, but of course he would need to be bent over the chair to receive it, which could have pushed the limits of Dolgnwot’s simplistic yet significant message and presentation.

And I can only sincerely hope that Hendo is inspired by this instalment and decorates his desk to match!

I think Alan would enjoy a brown microphone given to him by Professor Flint.

Maybe Hendo could wear a patchwork coloured bow tie designed by Samuel. I think it would be a nice touch.

Yeah, Hendo is definately a patsie. The Dolgnwot is just too convenient to be plausible. Also, if you hold a mirror next to Episode 10 and peer into the reflection, the second gunman on the Grassy Knoll is clearly visible, as are the scrawled words ‘kill the head and the body will die’.

Chuck, I hope you didn’t squeal. If the authorities get hold of any of our work, it’ll be into the dungeon under the Nice Garden In Reid for all of us.

I’m starting to notice just a few too many coincidences. I’m certain that the Dolgnwot series is an attempt to communicate with the anti-christ in preparation for the end of the world as we know it. Lucifer is at the root of it all, and Samuel is either willingly or unknowingly assisting the Dark Lord.

First coincidence lies in the Revelation to John 13:18
“This calls for wisdom: let him who has understanding reckon the number of the beast, for it is a human number, its number is (insert the frequency of ABC Canberra AM radio here).”
Perhaps this explains Samuel’s otherwise inexplicable fascination with local AM radio. That’s only the first link to Lucifer.

Another local with a great interest in local AM radio is John B1B5. He sounds like a great Aussie bloke with a wealth of knowledge about many different subjects varying from radio frequencies to car headlights, and probably a whole lot more. But has anyone ever wondered about his name? Being a man of the cloth, it dawned on me as soon as I read the name. It’s obviously a reference to the New Testament’s John 1:5
“The light shines in the darkness, but the darkness has not understood it.”
Not only does this refer to Samuel’s ignorance of his evil role, but also of his master. Lucifer comes from a Latin word meaning “light-bearer” (lux = light, ferre = to carry). Do you now understand what is meant by the “light shining in the darkness”?
It doesn’t stop there, I’m afraid. Have you ever wondered about the mystical Dolgnwot? I’m afraid to tell you that the name Dolgnwot could be an anagram. Yes, I can understand your shock now that you realise that Dolgnwot is actually a communication with the anti-christ. In its guise as an anagram it hides the message “Don’t glow.” Again, the two-fold cryptogram not only names its intended recipient (Lucifer), but gives explicit instructions for him not to rise yet; but to wait for the right time and place to begin the apocalypse. Scary but true.

So what is the intended location of the beginning of the apocalypse I hear you ask. The answer has been in front of us the whole time.
“a nice garden in reid”
This is a riddle to give the anti-christ his mission details. The riddle is an anagram of “a nice garden in reid” and the question is thus:
“Radiance reigned in ………….?”
The riddle is a cryptic and whitty allusion to the “radiant” Lucifer and his only appearance in the Good Book as such. In Isaiah 14:12 King Nebuchadnadezzah II is referred to as “…Lucifer, son of the morning star…”
The inclusion of the name Lucifer was due to a mistranslation by St Jerome of the Greek word for phosphorous and therefore inaccurate and not included in many modern translations of the New Testament. However, for those of us familiar with the Vulgate and earliest King James’ texts the connection is painfully obvious.
So where did the radiant (Lucifer) reign?
King Nebuchadnadezzah II was the King of Babylon. “Babylon” of course being the Greek form of the Akkadian “Babilu” meaning (wait for it) “gateway of the deity”. Coincidence? I think not.

OK. So the end of the world will be initiated from Babylon. So where the H*ll is that? I’m glad you asked.
Babylon hasn’t existed for thousands of years, but was situated at the modern site of Al Hillah in Iraq. The very same Al Hillah that is now the main recruiting station for the new Iraqi regime’s military. That’s a worry.

So now we know where. But we don’t know when. Perhaps the answer lies with SGS.

Samuel is a Hebrew name meaning “name of god”.
Gordon is a Gaelic name meaning “large fortification or other bulwark”.
Stewart is an occupational surname meaning much the same in English, a steward or keeper of someone’s property.
So is it a coincidence that the name “Samuel Gordon-Stewart” is analogous with the previously secret Masonic title “Keeper and Protector of the True Name of the Lord”?

But I might be reading into it a bit too much.

“Samuel in Golgnwot” is a great colouful read. A great change from those horrible black and white picture stories in newspapers.

And I’m really looking forward to the next episode of Samuel’s Persiflage. Or “the ‘flage” as we call it at the rectory.

Keep up the good work Samuel.