It is with a heavy heart that I must bring you the news that race caller Tony Campbell, the legendary stalwart of horse racing and associated sports in Canberra and surrounds, has died of cancer, aged 58. Tony passed away yesterday morning just before 8am. 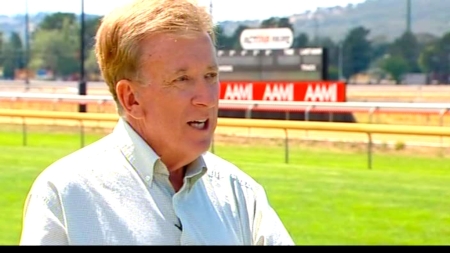 I really don’t know what to say, it’s just very hard to believe that he is gone, especially when he looked so well only two months ago (as seen in the picture above).

Oddly enough, Telstra Bigpond Sport covered the sad news [2] fairly well, so I will leave the words to them.

The NSW racing industry is deeply saddened with the news this morning that the ‘Voice of Canberra Racing’ Tony Campbell passed away just before 8am today after a courageous battle with cancer.

Tony Campbell, 58, had been associated with the Canberra Racing Club for 29 years in roles that range from Nomination Clerk to Master of Ceremonies. But, of course, Tony was best known for his role as racecaller for Canberra for 26 years.

During this time Tony called 25 consecutive Black Opals and is well known for his thrilling call of the 1992 Black Opal in which his great mate Frank Cleary’s Clan O’Sullivan became the first locally-trained winner of Canberra’s premier event.

Whilst Tony was well known as one of Canberra racing’s best ambassadors, he was also a passionate Canberra Raiders supporter and was the ground announcer at many of the Raiders home games in the early days of the Raiders.

In a long career Tony regularly called many Sydney races for the ABC and occasionally as on-course broadcaster for the AJC. Tony skills were very diverse, as demonstrated by the fact that he also called harness races including three Miracle Miles at Harold Park.

Tony was also a great community man giving up countless hours to entertain the residents of numerous Canberra nursing homes belting out some of his favourite old tunes on the piano. Tony always made himself available to charity organisations helping with many roles such as MC and was always happy to provide animated phantom calls when requested, and even acted as Santa Claus on the odd occasion.

Chairman of Canberra Racing Club, Howard Powell, said: “Canberra Racing and the Canberra community have lost one of their greatest ambassadors today. We are deeply saddened of Tony’s passing.

“Tony was known as ‘The Voice of Canberra Racing’ for 26 years and not only have we lost a great supporter of racing we have all lost a dear friend. Tony will be sadly missed; his passing will leave a void in our industry”.

While details are yet to be confirmed, it is likely that the funeral service of Tony will be held at St Brigid’s Catholic Church, Cnr Bancroft & Whilshire Streets, Dickson, on Friday, 26th May 2006 commencing at 10am, followed by a private burial, and Queanbeyan Racing Club will host a wake following the service.

I suppose the best thing I can do for Tony is to award him with a Samuel Salute, quite possibly the greatest honour I can bestow on someone.

Rest In Peace Tony, you will be missed.