Here is what it looked like before the change 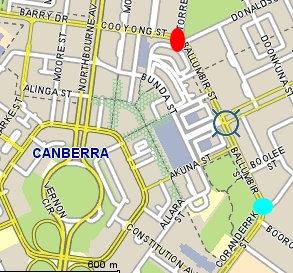 Ultimately this doesn’t solve much, as Cooyong Street is still wedged in the middle of Barry Drive and Coranderrk Street on the one bit of road. The better thing to do would be to just have Barry Drive as the main road up to Northbourne Avenue, and then have Cooyong Street as the semi-suburban/metro street from Northbourne Avenue to the termination of the road at Parkes Way (not show on this map).

If you’re confused, well you’re not the only one. The street signs were recently upgraded in this area and they refer to Ballumbir Street, which is odd considering that the idea for the change has been floating about since 1998 and received support in “public consultation” in December, which seemed to form part of the whole street sign upgrade process.

Here is a press release from the ACT Planning and Land Authority [1] which should help to confuse the issue a bit more for you (original press release here [2]).

The ACT Planning and Land Authority has approved the renaming of Ballumbir Street in the City Centre to Cooyong Street.

“Travelling along the two, it is logical to interpret them as being the same street,” Mr Savery said.

“The change is about helping people find their way around the City and reducing confusion where street names currently change along the length of a street.”

Mr Savery said the idea to change the name of Ballumbir to Cooyong Street – and also Binara Street to Allara Street – had been identified in 1998 during previous planning studies and, in 2005, the Canberra Central Program revisited the issue due to its street sign replacement project.

“As part of the Government’s Canberra Central Program, street signs throughout the City are being progressively upgraded to make them easier to read.

“It is an important part of the Canberra Central Program to ensure the city is easy to get around in and street signs are one of the fundamental ways we can achieve this.”

The public was consulted in December 2005 about proposals to change the names of Ballumbir and Binara Streets to Cooyong and Allara Streets respectively.

The Ballumbir/Cooyong name change received positive support, but significant objections were raised about the Binara/Allara change.

“To help people through the transition of Ballumbir Street’s name change, new street signs are being arranged for Cooyong Street that will have a second sign below them containing the words ‘formerly Ballumbir Street’.

“These secondary signs will remain in place for the foreseeable future.”

So they want roads to have one name for their duration, but still have three names for this one road…and I wonder how they went about consulting the public, one can only assume that it was the usual “place an ad in the Canberra Times Classifieds and then go ahead anyway” scenario. (Although if they would like to prove me wrong then I’m all ears).

It is worthwhile noting that the PDF version of the press release (linked above) contains ACT Planning and Land Authority’s “vision”, namely:

Canberra, a city like no other; an ideal city.

Well, one out of two ain’t bad…

How confusing Samuel.
You might be interested to know that at the point where Ballumbir and Coranderrk Streets meet, there used to be a building. It was originally St John’s rectory, and later St Gabriel’s School fo Girls, before being demolished in about 1955 to facilitate the road extension. I still have very fond memories of St Gabriel’s.
I’ll leave you with Isaiah 59:8;
“The way of peace they do not know, and there is no justice in their paths; they have made their roads crooked; no one who treads on them knows peace.”
My peace has certainly been disturbed by these preposterous proposals.

Some historians propose that Walter Burley Griffin was standing on the very spot where Reid is now located… a scenic garden of a place in a sunlit meadow… and aliens came down from the sky and showed him how to make crop circles.

And this is what inspired Canberra’s concentric circle layout.

I personally think some of these historians need a few 825s to garnish their heads with.

Perhaps ACT Planning and Land Authority were also visited by those aliens.

You’re right Samuel, ACT Planning and Land Authority may have affiliations with extra terrestrials. I heard a rumour that the old NCDC (National Capital Development Commission) was shut down back in 1989 due to supected links with MIB.

As for “Canberra’s concentric circle layout”, I think its pretty clear that Walter Burley Griffin was in a nice garden in Reid, probably reading from Ezekial 1:16;
“The appearance of the wheels and their work was like unto the colour of beryl: and they had one likeness: and their appearance and their work was as it were a wheel in the middle of a wheel.”

Ah, poetry. Where do you come up with that stuff, Sage?

Just look to the Good Book wonko.
It helps to solve all of my dilemmas.

I suspect Samuel has been working in Pandora’s Box. Can you verify your new job with Pandora Samuel?

Nope, not there either. Let me put it this way, I work for a business which is a contractor for a sponsor of the John Laws Morning Show.

Hobo-B-Gone??? Never heard of them and they aren’t a sponsor.

What about Wastrel-Away? The new tablet-form dole-bludger single parent deterrent? Am I getting warm?

Aren’t you thinking of ‘Panadole-Bludger’ wonko?

I thought that was merely experimental and was useful in keeping sellers of ‘The Big Issue’ at bay.

Speaking of big issues were you aware that John OB_1_Ken_OB?

I thought the sponsor was Goback2 Whereucamefrom, now in new lebanese flavour.

Let me put it this way…when I’m ready to make the announcement I will, but until then it doesn’t matter how many fake or real companies you name, I will deny it.