As promised, at 1:56:44 there was a celebration of the birthday of Samuel’s Blog, which included a singing of “Happy Birthday”, some coffee, and a few photos.

First up we have Nattie, myself, and a cup of coffee. In the background obscured by my head there is a Samuel’s Blog birthday sign which is basically the current birthday page header. 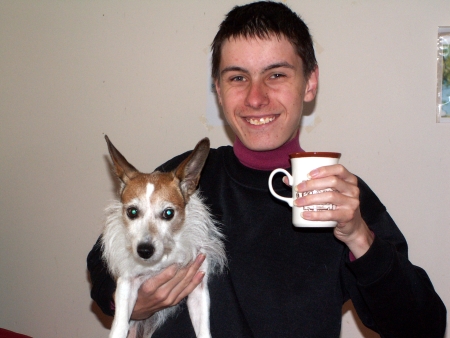 Following that is a photo of Nattie and the sign. 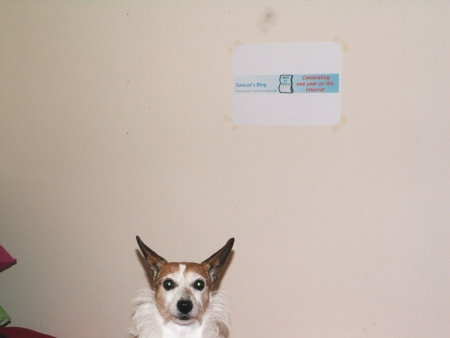 And a closeup of Nattie 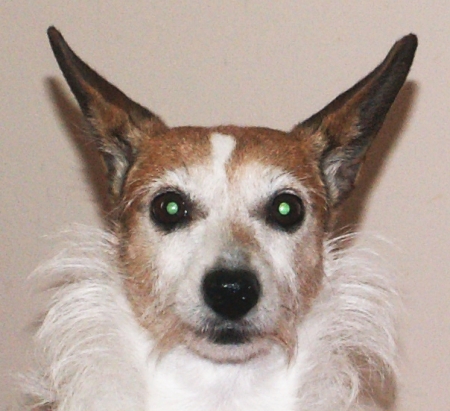 And a picture of me, my coffee and the sign. 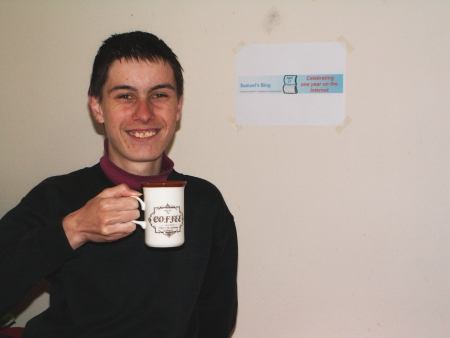 Definitely a pivotal and defining moment in the history of the internet!

Did you use Black and Gold coffee for the toast?

No, I used percolated coffee made in an [10], and made with home-ground coffee beans from (I think) Aurora Coffee.

Congratulations – only 173 years and 364 days behind the Sydney Morning Herald, which celebrates 175 years today (18 April)

Nattie looks a little bit wired … have you been slipping her some caffiene?

Congratulations Samuel on this monumental milestone!

I look forward to your next year.

Nattie does look a little weird in that photo, she was just about to wander off when I was ready to take it, so I had to mention “cheese” to get her attention.

The first photo took a few attempts to get right. Having ten seconds between pressing the button on the camera, and being ready with coffee and Nattie is quite a challenge, especially when Nattie looks away.

Definitely a bit of a crazy look, well, I’m talking about Nattie, but that caffiene also seems to get you pointing North … so, you took your own photographs?

Did you actually have Nattie and that cup of coffee gathered up when you pressed the shutter release with the camera on self timer?

I hope these inquiries aren’t boorish, but this site just arouses my curiosity … I mean to the point I have to sit down when someone comes in to the room …

And I think the sticky tape on the edges of the logo is a nice touch … sorry, the caffiene’s starting to take hold .. I might go and crack open the 825g tin of Black and Gold pineapple pieces (with the collectable superseded label).

I’m not sure if you’re aware of it but the folks at [11] have you down as a rumoured housemate for Big Brother 2006. The first photo in this bunch is also up there. Are you able to shed any light on that rumour? (great blog by the way)

Mmmmm, could it be yet another fake Samuel, which have permeated the internet like those Rolph Harris’s in that classic Goodies episode?

Can you confirm or deny, Samuel?