May 2005 started off with an awful lot of silence, one brief post on May 2 [1], and the next one on May 9 [2]. The second one was quite interesting as it outlined some possible career moves, of which one fell apart, one never happened, another happened and is still going, and the other one…well I never heard from the people. I also had a little bit to say about ACTION’s amazing timetable disaster, and a phone call from one of their public relations people. This was followed by [3] a newspaper publishing my recent editorial about ACTION’s changes, and lyrics to a song which I will ensure that you get to hear in one of the Tape Highlights of the future.

I then showed off some of my artwork, a picture I had drawn whilst in class. 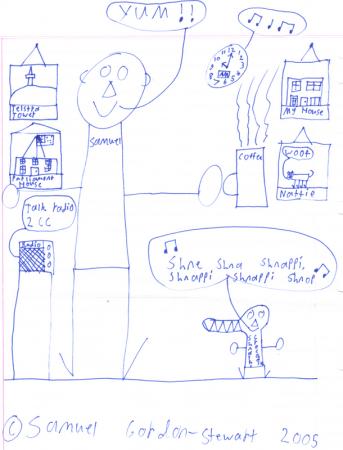 There was some [4] fun [5] with Linux printing, and then some true excitement, a 2CC dinner [6] which I was going to attend, more on that later.

A few days later there were some big announcements, firstly the Coffee-Cup-O-Meter came into existence [8], and then I had to change the way I submitted blog posts [9]. I enjoyed using email blogging, as it seemed much more flexible, quicker and easier than using the blogger.com interface, but that function broke for a while and I was forced on the blogger.com interface, and stayed there for quite some time.

Somebody took exception [10] to my post about the Friday the 13th loonies, and then I set about explaining [11] how the Coffee-Cup-O-Meter works.

ABC local radio decided to waste taxpayers money by advertising on commercial television [12]…and I thought they were always crying poor.

I got hooked [13] on Tux Racer, and then had a very high speed, which made me wonder if penguins can get booked for speeding. 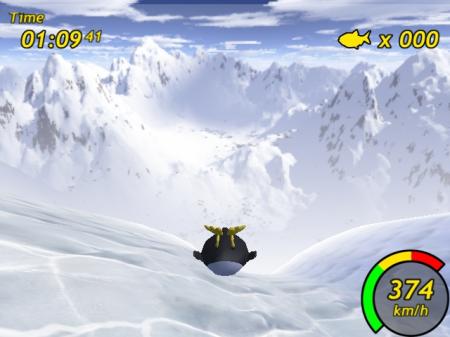 Not long after this, I discovered that I would not be able to attend the 2CC dinner [14], due to insurance issues. The insurer needed everybody to be at least 18 years old, and the dinner was one week before my birthday, this left me wondering why I was allowed to enter the competition in the first place, and what would have happened if I was a winner and not just a winner’s guest.

Tim Webster proved [15] that he is a great choice as a fill-in for John Laws.

Shortly thereafter, I had food poisoning [16] for nearly a week, and learned a valuable lesson [17] from it.

Friday the 13th’s Idiot Number Three struck again, but I had a cure for him [18].

And then, as May drew to a close [19], I started the countdown to my 18th birthday, and dropped a few hints about some interesting changes and new additions to Samuel’s Blog. What were these changes and additions? All will be revealed when we look back on June 2005, tomorrow morning, right here on Samuel’s Blog Year In Review.

Comments Disabled To "Samuel’s Blog Year In Review: May 2005"

I see your wall clock has chimes .

Yes, actually so does the one in my lounge room, it started chiming near the end of a phone call to Stuart Bocking because it was nearly a minute fast and it was nearly news time.