June 2005 saw many exciting changes on Samuel’s Blog, in fact it started off with a new feature, the Musician(s) Of The Week award [1], which went to Boney M. Later that day I announced two more changes [2], the addition of a Google search box (something which I didn’t carry over to this site), and advertising. I particularly like my quote about the ads

The other improvement is advertising…hmmmm, I hear people moaning…look, it isn’t that bad, it is actually quite good. I could have gone with any number of advertising providers, but I don’t want ads that flash, flicker, buzz, popup, popunder, squeal, annoy or interupt. That rules out a lot of advertising sites. I also don’t want ads for “Pills & Potions ‘R Us” or those annoying ads that appear on Yahoo Mail and Hotmail “You can live and work in another country”…who cares??? I don’t want to move country, and I doubt many of my readers do, if you want to move country then call a travel agent.

I then reminded people [3] about my Birthday and said that I would be getting a mention on John Kerr’s show, and intended on ringing him, something I later did [4], and even posted an MP3 of [5].

Another change [6] was having a link back to the homepage of the blog, something the blogger.com template lacked, but I added.

Nattie and I both have our birthday on June 2 [7], and Nattie loves cake. 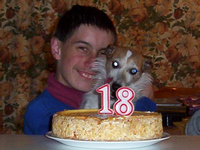 My head didn’t turn lime green with polka dots [8], but that didn’t prevent somebody from gawping at me in Civic.

And then we had another change, the Step-O-Meter came into existence [9], or was supposed to [10], and eventually did [11], with the first Step-O-Meter report counting 6927 steps for part of the day.

I then made a further announcement, I joined Skype [12], and then Firefly [13], which seemed to annoy one of the readers, who went and dragged out the discussion into another post [14].

I then had a grumble [15] about Fireworks and the way people use them during the Queen’s Birthday Long Weekend.

Then, on June 6, I brought you the story [16] of rumors that Stuart Bocking would take over John Kerr’s program later that month.

I even showed you a picture of Steppy, the pedometer that makes the Step-O-Meter possible. 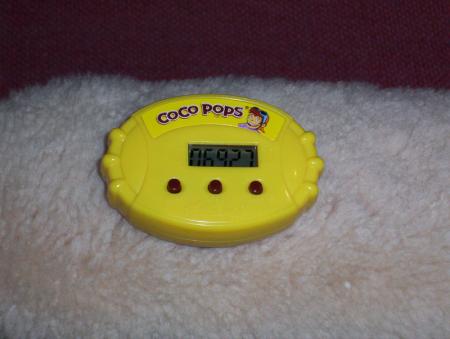 It was then time for the Dickson College open night, I invited everyone along [14], and then documented it [17] as part of what was a very busy day, I also rang Mike Frame on that day to voice my objections to the arboretum that the ACT Government had planned. I also debunked the theory [18] that I drink too much coffee and brought you real life pictures of flying fish [19], one of which is shown here

More news [20] about Stuart Bocking’s supposed move to nights, and then I added Webstat.com stats to the blog [21], which was very important as blogger.com don’t provide visitor stats.

The Stuart Bocking/John Kerr move became a bit more murky [22], I became very annoyed with Microsoft [23], had my record SmoothWall uptime [24], and showed some of the dangers of computer power saving [25].

John Laws had a rant [28] at the expense of 2UE Management, and I held my breath [29] as John Kerr was due back on air, in case Stuart Bocking took over. He didn’t take over, and John Kerr was back with many stories from his holiday, but the rumor turned out to be true later in the year.

Garfield had his 27th birthday [30] and Blogger.com added image uploading [31].

And that pretty much summed up the month! We’ll look back at July 2005 on Thursday morning, as we continue to get closer to one year of Samuel’s Blog!

Samuel, I am very impressed with the ‘Year in Review’ posts. I am enjoying them so much I am reading them.