Anyway, back to the story, 2CA’s Big Breakfast and Vegemite were running a promotion to coincide with “The Happy Little Vegemite Awards”, where it was possible to win $78,000 for your school by making a video with the theme of a happy future (and presumably Vegemite). The 2CA competition involved singing the Vegemite song, and then one of the people who did so each morning would win a Vegemite t-shirt and cap. It was close to 8:30am when I rang in to sing the Vegemite song.

Click here to hear Samuel singing the Vegemite song, and the banter surrounding it [2].

We chatted a bit about Vegemite and how I know the Vegemite song, and then Daniel starts playing the background music (which I and just about every other contestant ignored), and I started singing the Vegemite song:

We’re happy little Vegemites
As bright as bright can be.
We all enjoy our Vegemite
For breakfast, lunch, and tea.
Our mother says we’re growing
stronger every single week.
Because we love our Vegemite.
We all adore our Vegemite…

I then managed to forget the last line of the song, and Lisa started singing which helped to jog my memory.

It puts a rose in every cheek!

After that we chat for a bit longer, and just before I’m put on hold Daniel and I discuss our favourite AFL team, the Western Bulldogs (aka Footscray). Daniel is correct that we lost the previous weekend, we were beaten by Port Adelaide 23.11 (149) to 16.10 (106). Daniel then predicted that the Bulldogs would do well against Carlton the following weekend.

Near the end of the “Big Breakfast” Daniel & Lisa announce the winner…me! Lisa accidently says that I won a TV & cap, which Daniel corrects before Lisa informs everyone about a rabbit on the loose in Davenport Street, Dickson, Daniel’s light-hearted response was rather memorable. (Listen to the recording for it).

I didn’t notice Lisa saying “TV & cap”, so when she rang me off air a few moments later I defended her, although when she checked 2CA’s audio log she found out that she did say it accidentally, not that it matters.

The reason I think that it was a Wednesday when all of this happened is that I seem to recall that Dad and I were going to pick up the prizes the next day, but then put it off to the following day due to other comittments, and we went to 2CA on a Friday, at which time Daniel gave us a tour of the studios (from memory Lisa had a meeting to attend and couldn’t be there). The interesting thing about this is that Daniel had his Bulldogs top with him for the event (I can’t remember if I did or not), and Dad is a Carlton supporter. The next day the Bulldogs beat Carlton in a very close encounter 11.9 (75) to 11.6 (72), and on Monday morning I had a chat with Daniel who said that he was thinking about Dad and I sitting at opposite ends of the lounge…me cheering and Dad crying.

Anyway, for the record, a photo of the Vegemite t-shirt and cap (I’ve only recently grown into the t-shirt). 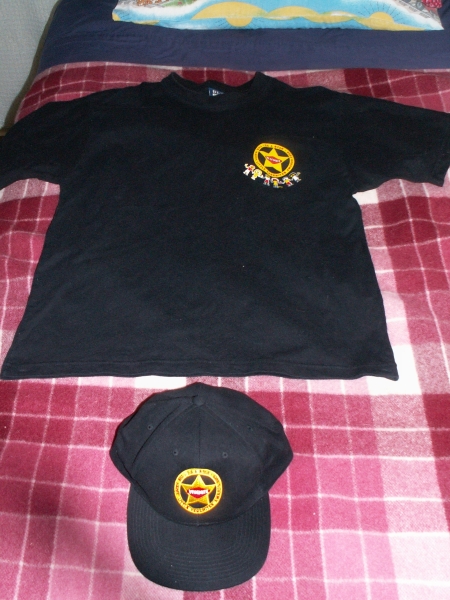 Is that a THOMAS the tank engine pillow I spy on your bed?

Yes indeed it is!

Mmmmmm … once again, a “Black and Gold” theme in the clothing .. where will this end?