The Ballarat Assay Office has a clock much like the one we saw in Samuel’s truck in episode four, and it is displaying a time of 10AM. 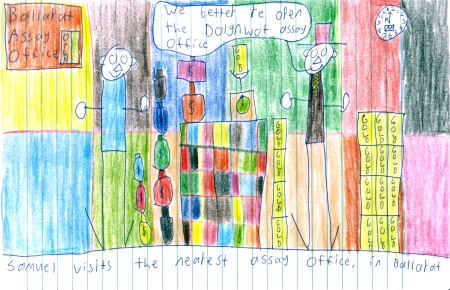 Another stirring installment this week. Although, leaving all that gold lying around seems to be inviting crime.

How much did the golden microphone fetch?

Stay tuned, the fate of the microphone will be revealed in a future episode.

Well, now we know what entertainment gossip men Peter Ford and Craig Bennett will be speculating about on the radio this week.

Now that my wig has returned to my head, albiet crooked, I can see that it actually says ‘gold’ vertically.

I can’t wait to discover the fate of the golden microphone. This is the best episode yet of Samuel in Dolgnwot.

The assay officer is also a highly sinister character. His dark robes, strange peaked hat and curious jewellery about his neck are strongly suggestive of the occult.

Could there be more to this man than it seems? Could he be using the gold for some dark design to bring ruination and plague to Dolgnwot?

I see “dogglewort” is still in one piece.
Obviously that disgruntled ‘Blogger’ hasn’t made good on his threat to “destroy Dogglewort” (sic) .

I also find it astounding how those heavy bags apparently defy gravity, as do the two figures .. could this be an indication of some sort of outer space influence?

I say that it may well heatseeker. I am going to comb over the script for Plan Nine From Outer Space. This should point us in the right direction.

I’ve checked the figures and it appears Dlognwot has a gravity field of more than 15. This would explain why the bags of money can be stacked at such a height and not fall, and also why people go about walking on their heels.