Samuel also has a cup of coffee waiting for him on the table. 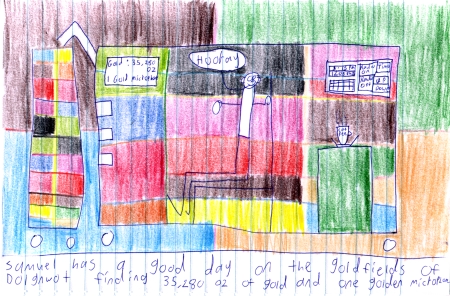 Mmmmmm. I observe the Black and Gold coincides in an overt fashion in this instalment (no less than five side-by-side – is this a subliminal message to Satanic Samuel’s faithful?

Will we see a rash of peope having their heads garnished with tins 825g pineapple pieces (those with the old style label before the “rerfreshing” change?)

I remain in awe at Samuel’s subliminal subversion ….

Yes, true, Heatseeker. It’s interesting to note the pineapple connection here, but have you noticed the colour scheme has darkened in this installment.

It’s all forboding, menacing blacks, blues, purples and greens, rendering in a more aggressive hand, with only splashes of the more positive yellow and orange tones of previous Dolgnwot frames.

Although Samuel appears to be smiling, I have a feeling the threads of this fantastic tale are converging into a climax of tragic Dostoyevskian proportions.

For too long has Samuel tripped lightly over the earth in his incredible machines, robbing the earth’s rich seams for his own personal gain. Mind intoxicated with dreams of immense wealth, of golden microphones and coffee baths and a radio in every room, Samuel has gone too far. The 35,280oz find was a mere taste for Samuel, raising within his breast an insatiable desire for more gold, incalculable riches with which to weild the power to buy stations so they can no longer cruelly toy with their listenership by swapping the DJs timeslots.

All this I can tell from the malignant colour scheme to this weeks episode, the thrusts of intemperate red, billows of swollen, depressed blue… all is not well in the Kingdom of Dolgnwot.

Sublime. I am reminded of Van Gogh’s ‘Starry Night’. The colours in this piece evoke a response from deep in the viewer’s consciousness. It says “Awaken to this moment, become your dream.” I am, as always, spellbound.

Yes, the combination of coloours says it all, as does the persiflage played backwards at varying speeds!

Irresistable triggers to the weak of mind!

I will be avoiding the 117 825 gram tins of Black and Gold (of the old style label before the “refreshing ” change) pineapple pieces I have stashed in my pantry (hey, he who becomes a beast relieves himself of the burden of being a man, or so the Persiflage told me, when I played it backwards, at varying speeds …. and I can only express extreme regret for stealing John B1_B5’s bike, but I wasn’t in control of my faculties due to the subversive influences) however, thanks to the subliminal triggers of this latest Dolgnwot intsalment … I shudder to think what I may be capable of with such formidable powers at my dipsosal … I will be a Jason lashed to the mast as my argonauts row with Samuel’s syrens seducing me!

Only the (Black and Gold) tin foil hat with Wonko’s Yellow Pages fashion statement will prevent me from yielding to Samuel’s seductive syren’s!

Also note, heatseeker, how the thigh bones of Samuel are growing, becoming more elongated, as his his torso. Note the length of the seat used to accommodate Samuel in his vehicle.

Could he be about to transform into some beastial form? Will cloven hooves be next? Will be become a Goat Witch?!

A very interesting oservation whitch escaped me Wonko, although I have Samuel’s Syren’s ringing in my ears.

Yes, only a matter of time before horns sprout on his head!

In many respects his form reminds me of the Nordic cave inscriptions depicting the hunting of wild erhu and whale. I know the nwot in question lies far from the sea, but the figures are distinctly prehistoric in nature.

We have tried colour pshycology, code, numerology, physics, fractal mathematics, but have we considered Sam is unconciously rendering prehistoric folklore? Syrens would fit in there. Or is that Greek mythology?

And so few answers … the Da Vinci Code by comparison was simplistic ..

Maybe we should get in touch with Dan Brown? Could this be his next best-seller? Can he crack the Dolgnwot Code?

In fact, between you, me and Chuck… more comers welcome… we could do it ourselves. As a write, Dan Brown needs his head garnished with some old fashioned B&G.

Satan: played by Steve Buscemi — diabolocal fiend wanting to call Dolgnwot his own

John Lovitz, sheriff of Dolgnwot. Distressed by influx of hi-tech house caravans, wants to keep things the way they weres.

John Laws (astride the Golden Microphone) and Alan Jones (poised to leap out of a closet) would have to be star performers!

Sheri Moon Zombie as the quarter masters wife. Because she can act substantially better than Nicole Kidman.

Vincent Price as the naughty tax collector of Dolgnwot. You can even see him in 3D in ‘The House of Dolgnwot.

Now that the defamation laws have changed, I can call Alan Jones a poof because I am just stating a fact.

I am tossing up whether or not to put forward the names of Kathy Bates or Nicky Webster for the role of Mary Magdelin. The lady of the night in the red light district of Dolgnwot.

At least the origins of Laswlie’s golden mic have been put to rest.

Mark Bracks as himself.

Nicky Webster as Mary Magdeline. That’s inspired Chuck. But who would play Jesus? Is this a gospel tale?

I like the golden microphone, Samuel. A humourous touch.

I think Whoopy Goldberg would make a good Jesus. In keeping with our traditional thoughts on Jesus of course. There is also Jeff Kennett, who has always thought he IS Jesus…..seems pretty straight forward to me.

Who would play Sam?

Why limit the Dolgnwot experience? I say bring it to the stage. Hugh Jackman as Sam. I’m seeing interpretive dance and rousing sing-alongs.

Interpretive dance! I am there.

Sorry. That was for devotees of The Big Lebowski movie.

Sam, you should check it out. It has a lot of cuss words, a staggering proportion of cuss words, but it also has Philip Seymore Hoffman, John Goodman, Steve Buscemi, John Tottoro (?) and Jeff Bridges. It’s about a case of mistaken identity — a rug is pissed on, and the movie concerns itself with the efforts of The Dude to get compensation for the pissing.

The script is the best I have ever read, seen, listened to.

So Sam, go rent it, have a few coffeees, enjoy.