Episode six has arrived, and Samuel has gone shopping, obviously in need of supplies before he starts his gold digging. Samuel can be seen here in the Dolgnwot General Store buying many things, including 2 kilograms of coffee. 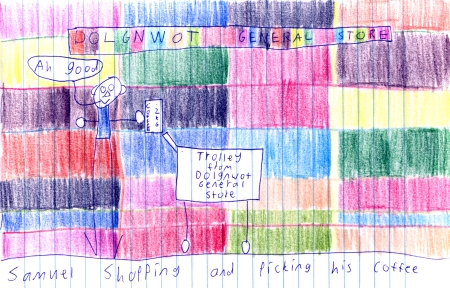 Is it Black and Gold coffee?

Notice the two black squares are sitting next to gold ones. Could the pieces of the puzzle be slowly and inexorably drawing together?

Possibly. We may have to wait until the final episode. Then we can lay out all the ‘pieces’ and place them together patchwork style or quilt style depending on what side of the Atlantic you are from. This is where the answer may lay.

I am currently researching the subversive origamist Kunihiko Kasahara. Who along with being an AM radio fan, dabbled in the black arts reflected in his patchwork origami.

When the final episode has been shown, I will fold them into Kunihko’s subversive and subliminal patterns and see what answers or messeges Samuel has created.

I am treading carefully with this. Others have tried to follow these leads but have vanished.

While in Japan, Wonko may be able to check some leads?

Yes, reports are more than a few people who have pried too much have ended up in that “nice garden in Reid” …

However, I think the coloured squares are similar to the system used to communicate with the aliens in Close Encounters of the Third Kind (although, for the life of me, I haven’t been able to find the first two instalments of the movie).

I am currently experimenting with corresponding flashing lights in concert with the various instalments of Persiflage played backwards.

In my latest session I managed to decipher: “He who becomes a beast is free from the pain of being a man. I knew it was a crime, I did it anyway”.

I shall consult the texts of Allistair Crowley in addition to my research into the shadowy art of origami, Chuck.

Still transfering content from the old site, but please feel free to visit when you need a break from puzzling over the vexed thereoms contained in the persiflage and dolgntwon question.

‘A nice garden in Reid’ or a fridge. I refer to

I am concerned as to whether Samuel has been influenced by one Jeffery Dahmer.

Yes he is either communicating with aliens or Humphrey B Bear.

Yes, note how the gold is diagonal (which evokes “dlognwot”) to the black in the top left corner of the latest instalment … I am trying to comprehend the significance.

I will ponder further black/gold links now the subliminal influence has been placed in my psyche by Samuel’s imagery of tins of bulk goods, which, as my esteemed colleague and fellow researcher Chuck pointed out, “are the perfect size and weight to garnish someone’s head’ … I shudder to think how I will behave next time I am lurking about in BiLo …

But, alas, I can not be held responsible for my actions

The lack of full stop was intentional .. it implies some sinister purpose.

The more I think about this question, the more I am convinced that to merely think about dlognwot is not enough.

To understand the concept is not enough; you must accept that you, me, us, them, everybody, everybody IS dlognwot.

The nearest analogy I can come up with, as crude an inaccurate as it is, is that dlognwot is a sort of Matrix. The whole world is made up of coloured squares, rotating and mutating in an insanely complicated dance of which we cannot fully comprehend until we take either the blue or the red pill, offered by Samuel L Jackson, with the entire kelideoscope of our lives reflected in his mirrored shades.

The simplicity of Samuel’s stick-legged, heel-walking characters is just him whispering ‘follow the white rabbit, neo’.

Who among us is willing to see how deep the burrow goes? Who is willing to sample a tincture of Black & Gold Bleach; heed not the call to Caution, and rend asunder the veil of dlognwot and see the seamy truth inside?

Wow. I just read The Train. Shades of Enid Blyton and Jack Higgins. You have a knack for narrative, Sam, and a great amount of imagination. Somebody once said that a man without imagination is bad, or something. Chuck, can you help me out.

In any case, Sam, I think you should submit this story to a children’s book publisher. They could tidy it up for you, get an illustrator, and maybe make it into a book.

All the people in the book should wear skivvies, though. Dick, Fanny, Bessy, all of them.

What the hell am I thinking!?

Sam, you should illustrate it dlognwot-style and self-publish. I does need a good editor though. I’m happy to do it, as long as Chuck does your EP, and they are sold together as a book CD.

In fact, it could be a double CD with one CD the ‘reader’, with chimes to turn the page (done by yourself on the notetaker), and the other ‘ The Sounds Of Samuel’ — like the soundtrack to the movie. Chuck’s single, the persiflage remixes, highlights of Echoes and Persiflage, maybe some Nattie. Maybe Nattie’s bark could be the signal to turn the page of The Fridge? I don’t know. A little too much Black and Gold for me too.

What on earth are you talking about Wonko? What is this mysterious “Train” story?

Who among us is willing to see how deep the burrow goes? Who is willing to sample a tincture of Black & Gold Bleach; heed not the call to Caution, and rend asunder the veil of dlognwot and see the seamy truth inside?

Yes, a good question, one which I don’t think I’m brave enough to try to answer, lest I end up in that “Nice Garden in Reid”.

Apologies, Sam. I confused the Electric train with the title of your story, ‘The Fridge’. ‘The Train’ should read ‘The Fridge’.