Time for episode five of this second series of Samuel In Dolgnwot, and this week Samuel is walking around Dolgnwot with his gold detector and his gold map printout. 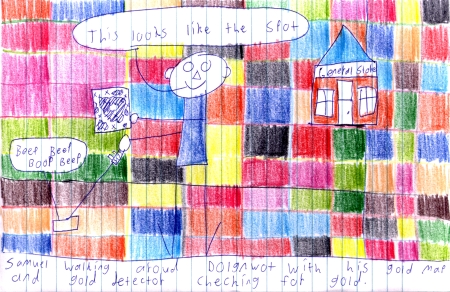 This episode was drawn on Saturday morning at about 4am whilst listening to John Kerr on the wireless. It is also the first episode to use a mechanical random number generator to decide the number of horizontal and vertical lines. In this case it went for 9 vertical lines and 8 horizontal lines. The random number generator I am using is a mini roulette wheel (standard type, not the american version which adds a 38th spot containing “00”), and instead of using a ball on the wheel, I use a marker at the top of the wheel holder to decide the number. I then use the last digit of the number, and take “0” as “10”. The number on the wheel used for the vertical lines (which are drawn first) cannot be reused for the horizontal lines, however it is possible to have the same amount of horizontal and vertical lines as many numbers on the wheel share the same last digit.

For example, if I spin up “25”, I would then have five vertical lines, and the next spin might be “30” which would give me 10 horizontal lines. The only number which would not be permitted as the second number in this case would be “25”, as it is already the first number.