You might recall that we previously met Catherine Garrett in about half a second of video where she introduces Daniel Gibson, who is showing off my weather picture in 2000 [1]. 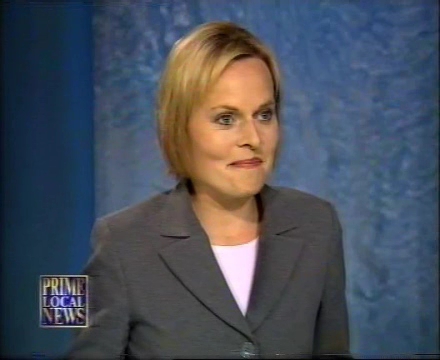 I met Catherine in 1999 when she was reporting on a story about ACTION hiring female bus drivers and she had a cameraman with her filming the bus driver of a school bus outside Ainslie Primary School. On that occasion we had a chat and she gave me a “Prime Possum” postcard, which I still have here somewhere.

Prior to Prime Local News going to air with my weather picture in 2000, I rang through to speak to Daniel Gibson and ended up having a brief chat with Catherine, who remembered me from our conversation the year before, and even remembered some of the subject matter.

Since then, Prime Local News folded and Catherine went to the ABC as a reporter on their local news service. In 2002 I was informed by an ABC reporter that she had gone on maternity leave, and the next I heard of her was last year when she wrote one of the rare useful articles in City Ads [2], about her time in Germany with Deutsche Wells Television [3].

Catherine is now back in Australia and is a reporter and producer for the ACT edition of Stateline [4], the weekly state/terriotry based current affairs show on ABC Television.

Regular host of ACT Stateline, Phillip Williams is overseas reporting on the events in the Solomon Islands, so Catherine Garrett filled in on Friday night, looking as bright and bubbly as ever.

I’m obviously very late in welcoming Catherine back to Australia and Canberra, but I must say that it is great to have her back, and I will send her a letter on Monday to say just that.

Perhaps Rolf Harris may paint her portrait one day .

Yes a warm welcome back Catherine.

Or sing a song for her John.

She’s got that type of face that would be ideal for a portrait ….. perhaps in the Archibald Prize …..

There was something on ABC TV about Rolf and a painting of Queen Elizabeth II last night wasn’t there?

It was tonight at 7.30pm .– His painting was voted “third popular” portrait of the Queen by a poll in the BBC “Radio Times” magazine .