Credit to Media Watch for finding this one [1]. 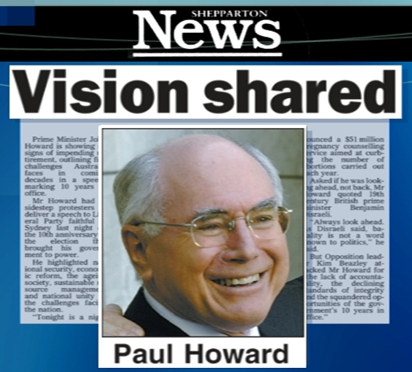 The photo you see there was part of an article about John Howard’s 10 years of prime ministership, Media Watch said this about the caption on their TV show.

Media Watch seem to think this was a mistake, but did they consider the possibility that Shepparton News [3] may have uncovered John Howard’s secret identity…perhaps Paul locked up John many years ago and assumed his identity…or maybe not.

Hmmmm …. who knows ? …… Oh, by the way ….. Shepparton is where the Radio Australia transmitters are located.

There WAS a transmitting site at Cox Peninsula near Darwin too, but that was SOLD to a private company who now broadcast religious programs from there !

Oh well ….. I guess “short wave” listening is on the decline ….. even in Third World countries .

Perhaps the sub editor involved was thinking about Pope John Paul when he was writing this headline?

Pope John Howard. Now that has a nice ring to it.

haha don’t pilch of the mediawatch site, leave that to me!