Samuel’s had a tiring journey to Dolgnwot, and as such is taking a nap. Being 1:50am on a Sunday it is probably a good time for a nap, unless of course you are listening to John Kerr, who appears to be on the radio. 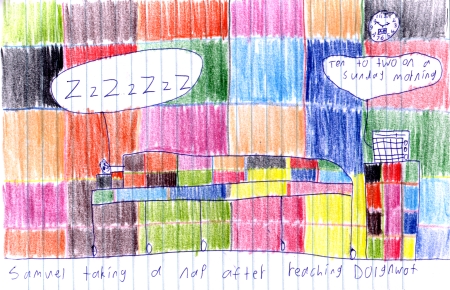 The shape and size of this paper seems to induce a natural response of 5 vertical lines and 4 horizontal lines, which is producing a rather monotonous pattern of backround colouring, so I think I will be using a natural mechanical random number generator for the future line numbers, which will produce a much more interestingly varied amount of background patterns.

If you notice there are two things which make this analogue clock brilliant in my opinion.

Secondly it shows you whether it is AM or PM, which, whilst mildly insignificant, is a nice thing to have on a clock.

As the real Samuel takes us further into the fictional Samuel’s thrilling adventures in Dolgnwot, I too think there is more to this piece of art than meets the untrained eye.

He has no eyes because as described in the ancient funerary text ‘The Egyptian Book Of The Dead’, the eyes are offered as a gift to the god of the underworld for a speedy resurrection. He has also been entombed in a very colourful and exquisite patchwork sheet, woven with gold.

I suspect Samuel is covering all bases and borrowing heavily from all books of the dead.

There are actually 35 vertical lines including the lines that come printed on the paper. 3×5=15. 1+5=6. The number of the beast.

If you add the five vertical lines to the four horizontal lines 4+5 you get 9. 9 upside down is 6. The number of the beast.

Samuel’s brilliant am/pm analogue clock has two nines and one six. Look at it sideways and you get 666. The number of the beast. Samuel gives a subliminal hint to the two 9’s by pointing at the number 2 with the hour hand.

The time 0250 on a Sunday morning is the time Christ rose from the dead. Another subliminal hint to the satanic ritual of resurrection.

Again, John Laws is giving Samuel subliminal messages via the medium of am radio.

Maybe Samuel should use a random number generator.

My thoughts exactly Chuck … I was very rapidly reaching exactly the same conclusion … much more to this “art work” than meets the eye!

Who knows what other messages will be inflicted on the weak of mind in the next instalment!

Yes, I am slightly worried by the disappearance of Wonko Heatseeker. He has not been heard of since the last installment. I hope Aunty Jack has foil wrapped around his head.

The clock is accurate to whatever timezone is in force in Dolgnwot at the time of the event.

The AM PM feature on the clock is quite useful, and somewhat rare on “analogue” clocks .
Is it a “wind-up” or electric clock ?

When I was at Primary school, ALL the clocks were “wind-up” types . A bit of a pain, but at least they kept going during a power failure .

In fact, I’m going to see if I can get hold of one of those wind-up wall clocks . Would be a useful addition to my computer shack ( formerly Radio Shack ) .

It was to late, i looked before i could complete my protective foil helmet and since have had an overwhelming urge to dress like wally and blend amongst a large crowd of beach goers……go figure.

p.s analogue?? is there any other kind?

I will be watching the hands on that clock in the next week to saee if they move to relay some secret code.

I worked out that it works like one of those magic eye pictures, if you stare at it long enough with your eyes semi crossed it looks like a guy with no eyes lying in bed listening to the radio.

I can’t buy a replica wind-up wall clock with a pendulum anywhere in Australia . I won’t deal with Ebay, so I’ll just have to order one from the USA.
I saw one on special for only $40, so I won’t do any better than that , but I’ll have to pay for “shipping” (postage).

What is your beef with eBay John?

Also why a pendulum? Don’t you have a ouija board or dowsing rods? Will Samuel use a pendulum to find the gold microphone?

Chuck, I’m impressed with your maths nouse and lateral thinking. You could well be right… the code to this picture could be in numerical rather than visual form.

I can’t decide because I’m still in shock. When I first glanced at the picture, I thought Sam’s head was his feet, and naturally I glanced to the opposite end of the bed, and saw just a section of gently-sloping multi-coloured pathwork and kind of freaked out. At the same instant I saw the five bed supports and took the bed to be a hospital gurney.

I admit to freaking out a little. People with shrivelled heads for feet, hospital gurnies, symetrical coloured grids, decapitation, the lasagne… it was all too much.

I’m reassured by your hypothesis, Chuck. It could just simply be another ‘666’ message from the devil and that Sam is okay, and not going anywhere soon, at least until he’s layed a cable or dropped a nugget…

Ahhh the theories of the masses. There are no hidden messages in the picture to my knowledge, although I must say the theoretical reasoning of the masses is in fine form, albeit misleading.

Samuel’s eyes are not missing, they are simply closed, he is sleeping, and snoring, and has the radio on.

Don’t waste your time posting links to Ebay, cos I’m not interested in ANYTHING they have to offer.

Gotta have a clock with a pendulum to give that authentic “tick-tock” sound .

I’ll put over a “wanted to buy” on the Trading Post (on the Radio )on Saturday .

Can anybody guess which Radio station that would be ?

Now now, let’s not antagonise each other please.

I could have guessed that John, but seeing as I hear you on there most weeks, it probably would have been cheating for me to do so. Anybody who pays attention to the random quotes would also have been able to work out the answer.

haha, I didn’t really expect an answer Samuel, but I’m looking forward to getting a wind-up pendulum clock in the shack as soon as possible .

Reading ” Samuel in Dolghwot ” , or, more specifically, looking at the associated drawing(s), can be quite inspirational !

My sentiments exactly John. I have just bid for a hospital gurny and a multi-coloured patchwork coffin on [7]

I knew the answer to your question too. Your shack sounds like fun.

You can see the Alarm Display Panel in my Shack here –