Welcome to the official opening of Samuel In Dolgnwot’s second series. Series one had its own title graphic [1], and so does series two. 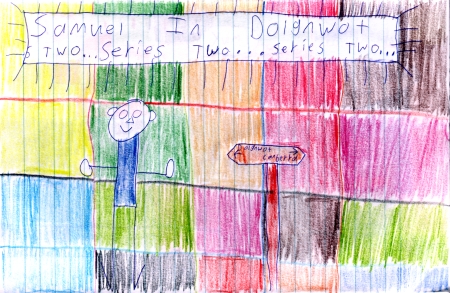 And now it’s time for episode one, which picks up where series one left off, with Samuel drinking coffee after returning home from the now goldless goldfields of Dolgnwot. 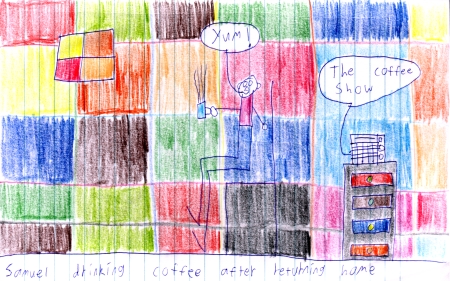 I picture the goldless wonderland that is dolgnwot,
such a heaven like place……the artistic potential of this series is so high i see world domination

Since Dolgnwot is an anagram of gold town, I have used anagrams of gold town eg ‘won’t glow’ and Samuel Gordon Stewart eg ‘A leeward goon Mrs Sturt’.

I will look forward to every Sunday night. I quite enjoy Dolgnwot and will anticipate all the twists and turns.

This is the link if anyone wishes to anagram their name.

Ahhh, now I get it. I used to have an early Windows app and a DOS app which generated anagrams, there must be plenty of them out there.

I should probably explain David Young’s “thing”. David Young is the host of 2CC’s garden show, and he has a “thing” which is usually a gardening related phrase or name, callers give him a letter and try to solve the puzzle. It’s basically a modified version of hangman.

For the record, David’s puzzle on Saturday was “Mauve Autumn Crocus” and I got it before anyone did on the radio, thanks to the help from Crossword Helper.

I just took us from the subject of Dolgnwot to gardening word puzzles didn’t I? Sorry about that.

i think dognwot is a fantastic place i cant wait until march 12 to see the next installment so stunning.

Thanks. I will use Crossword Helper to help with those damn cryptic crosswords. Gardening word puzzles sound interesting. I wonder if Kevin Heinz is doing them now that the ABC retired him.

Sorry to lead you from Dolgnwot up the garden path to word puzzles!

During the class exercise, “Towngold backwards” was suggested as the name of the gold town, “Dlognwot” was then written incorrectly by the teacher as “Dolgnwot” and the name was approved.

A slow, but promising, start.

John, I think it may have been, but this was an activity which combined all three classes (or maybe only the two that shared the common area, I can’t remember), so it could have been Mrs. Bropy, Mr Busch, Ms. Nash or Mr. Simons

Ed, yes, a slow start but it will be busier shortly.

Samuel, my six year old in Year One does drawings like that. Do you draw like a small child on purpose as artistic expression? My autistic 13 year old draws like that due to his condition.

Could you do some artwork like an 18 year old?

Yes, they do have a certain simplistic quality, and a chequered theme … only a matter of time before prison inmates start shunning Pro Hart and instead start producing high quality Dlogwnot fakes for sale to unwary international art collectors on eBay.

Samuel, in the second picture, you appear to have no buttocks, but funny jointed legs, amazing!

Can Samuel in the story go postal at the Doltwognt Summernats after overdosing on caffeine, and bury the victims in mass petunia gardens in Canberra?

Personally, I’d like to see the Dlogwnot Samuel drop some big rocks on the heads of people who impersonate him and those horrible, horrible people at Needs to be Glassed … this could become a bloodbath!

I see big aspirations for dolgnwort.
Cunninglinguist, Samuels’ Artwork is unique.
We are all induviduals, and i am proud of Samuel to expressive himself the way he does.
It’s not just about the drawing it’s the ideas behind them.

I was never very good at 3D drawings, and quite frankly I like my “unique style” as an art teacher once called it.

The “patchwork art” or “chequered” style is one that I developed in 1999, and have used for certain works ever since. It is a way of adding a splash of colour to the picture.

Samuel In Dolgnwot has an intrinsic link with “patchwork art” as it aided its development. It does take a lot longer than most of my drawings though, and as such is reserved for Samuel In Dolgnwot and other occasional works of art.

Well, the good news is that the word “Dolgnwot” is totally unique.
I did a Google on it, and the ONLY references are to Samuel’s Blog .

I would have thought a schoolteacher would be capable of writing a simple name like “goldtown” in reverse without making a mistake, but perhaps that’s expecting too much ……..

Kooky, I am being nice. I am curious about the phenomenon that is Samuel.

Samuel, could you share with us some of your other artworks? Your photography is pretty good.

Is the ‘patchwork art’ a form a cryptographic code similar to that of ‘The Matrix’? I think you just have to learn how to read it and then you will see the 3D world of Dolgnwot.

I’m not sure about ” cryptographic” Chuck, but the series’ patchwork appears to have certain visual hypnotic qualities similar to the aural influence of the “Persiflage”, which I theorise along with “Dolgnwot” is a key word which triggers Samuel’s indoctrinated disciples to fulfill their assigned mission.

Note how the colours form subtle sequences – you will note two green squares in the top artwork, which are transposed in the following illustration in a slightly different shade, which sends expliicit messages to the more impressionable among us.

According to my research, the first Dolgnwot series caused Sam’s faithful to gather at Cronulla, and all it took was a keyword during Samuel’s regular phone in to John Laws to unleash them into their frenzy.

Not surprisingly Samuel discussed his Persiflage with Lawsie that day, hence my ever credible theories about Samuel’s subversions.

My friend at the National Gallery of Victoria has alerted me to the fact that John Laws is indirectly sponsoring a retrospective exhibition of the father of Impressionism Pissarro. Laws is a major shareholder in ‘Investec’, ‘JcDecaux’ and of course ‘Qantas’ who are sponsoring the exhibition. Is it a coincidence that this exhibit is being shown at the same time Dolgnwot Series 2 has been exhibited?

Dolgwnot has an eerie resemblance to Pissarro’s earlier work. I would say that Samuel’s linear spectrum of colours, as well as defining his individualism and cognitive concepts, may be Neo-Impressionist. Therefore, like Heatseeker says, sends explicit and impressionable messages to those whose faculties may be not be strong. Simliar to David Irving sending coded messages from jail in Austria to young and impressionable Neo-Nazis around the globe.

Needless to say, I quickly removed the glasses and flung them across the room as if they were possessed and had a Flat White to calm my jangled nerves.

Just as I suspected … hidden messages!

Either that or I need a big rock dropped on my head, heatseeker!

Whoo! I’ve had my first chopping! Sam has used his right as a blog author to censor his readers!

Thanks Sam… that priest comment was way out of line. And what he did with those 3D glasses!!

I’m just glad that my off-colour gag was not about Mohommad. Instead of simply deleting posts, I might have had Sam leaping on a plane, flying to Japan, then opening his coat and revealing scores of rocks strapped to his body and threating you-know-what! Arrrghhhh!

Sam, all chuckles aside, haw haw, I was just wondering how long it takes to colour each square. I mean, colour over each satanic message you’ve sketched lightly with thicker, heavier strokes.

I ask because I find it inspiring how much effort you put into your work. I’m serious.

Ah, on further consideration, I realised I insulted an entity far more important to humankind than a mere god — I insulted J*** L*ws!

Rest easy, everyone! The line in the sand has been drawn. Joke about religion all you like… just don’t offer an opinion about Australian talk-radio hosts. It can cause serious offense.

I have learned my lesson Sam and am contrite.

1. I’m tired of the whole hidden messages tripe
2. Comments were removed due to defamatory content, or content which, in light of the recent religious cartoon fiasco, are probably crossing the line of acceptability.

Wonko, nonsense about hidden messages to one side, it takes thirthy seconds to a minute for each square, depending on the size and other details in the square.

Don’t worry Samuel. I don’t mind you removing my posts about a certain religious figure.

The thing is if you removed the Mohammed ones why didn’t remove the Piss Christ ones.

This is the problem. Everyone seems to be scared of offending Muslims but not Christians.

Either remove none or all of them I say. But it is your blog and up to you.

True. They were off topic though.

Hmmm, missed those ones.

Jesus, Mohommad and Jehovah went into a …. can I tell this one here?

I think all the coloured squares are a code … I’m going to punch holes corresponding to colours in to cards and run them through a computer to try and decipher the message to the faithful … alas, putting the cards through in the correct sequence could be the biggest challenge!

That’s an interesting idea, Heatseeker. The computer would need to be at least as powerful as the ones used to decode the human genome. In fact, it took a massive network of computers all around the world sharing the calculations to finally crack it.

Perhaps we could apply for a research grant?