As you may recall from this post [1] (I have been referring to previous posts a fair bit recently), 2CC will be running an outside broadcast from the grand opening of Bunnings Belconnen. To my horror I have discovered that this Bunnings store will not feature a cafe and I will have to add “picking up coffee” to my schedule. Either that or taking coffee in a thermos.

My plan for the day is below, but right here I am reproducing the multi-page advertisement that Bunnings took out in The Chronicle (click to enlarge). 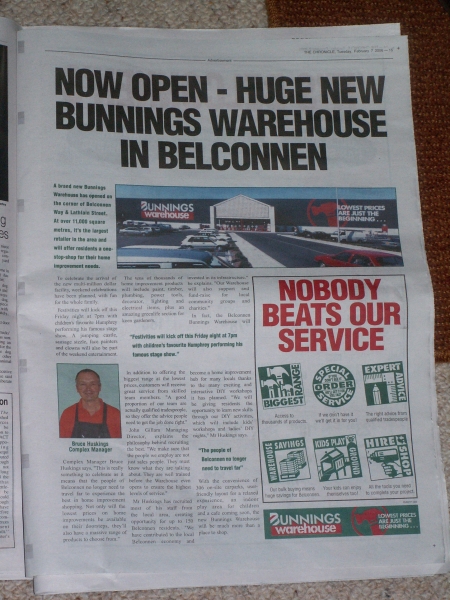 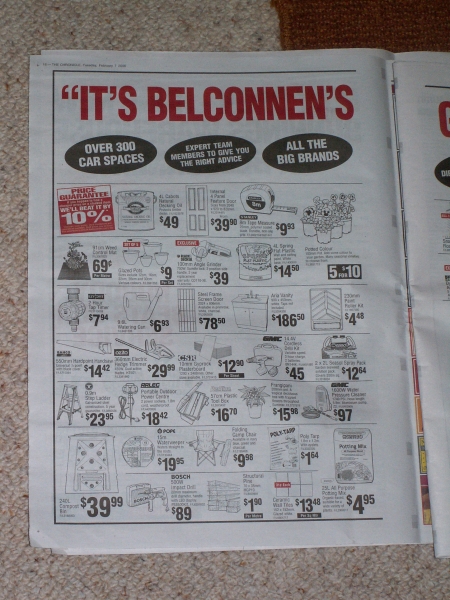 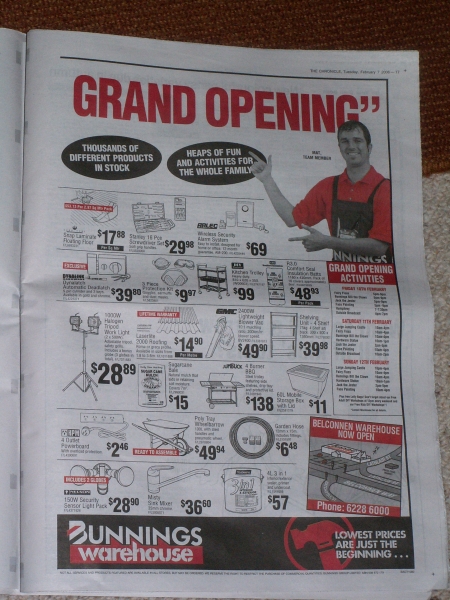 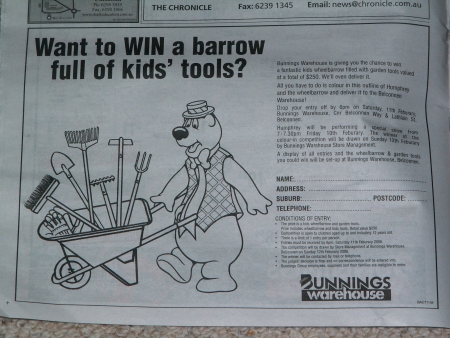 Yes, that’s right, Australia’s favourite children’s entertainer (although you don’t have to be a child to enjoy his show), Humphrey B. Bear will be there to entertain all and sundry from 7pm-7:30pm. He will be performing a special show at that time, and I hoping that he will be walking around the store for a little while before that. He probably wouldn’t be great on the radio (he doesn’t speak out loud), but it would be nice to get a photo of him standing next to Mike Frame at the 2CC outside broadcast.

Anyway, Friday for me will involve leaving home at about 8:45am so that I can be slightly early to CIT, find the correct room (J028) and hopefully be there at the commencement time of 9am. As previously stated, this “Introduction to working in your chosen profession” class, assuming that it sticks to its name, will be one of the greatest pieces of irrelevant snoring material ever to be produced by an educational institution…I’ve already worked in my “chosen profession”, why do I need to have it explained to me for five hours?

My theory is, the earlier I get there, the earlier I can get out of there. With any luck there will be a break which includes 11:30am-Midday so that I can enjoy Best Of Laws in its broadcast form.

When the class ends at 2PM, what follows will depend on what happened during the CIT class. If there were no break (they may find me a bit agitated if that is the case), I will need to decide where to have lunch. However, as I suspect that there will be lunch and morning tea breaks, I will make my way to the Civic bus interchange and catch an intertown bus to Belconnen. With any luck, I will be able to catch a nice orange bus, and avoid a horrid green contraption. Due to the fact that I will be pressed for time, I will probably catch the first bus I see. It will probably be around 2:10 or 2:15 when I reach the Civic bus interchange.

One of the many problems with ACTION’s new green buses is the way they interfere with the AM signal, this generally means having to listen to 2CC over strange buzzing and whirring noises.

When I get to Belconnen (approx 2:30), I will enter Westfield Belconnen, walk to the food court, and visit one of the coffee shops I like out that way, pick up a take away coffee, walk out of the shopping centre, onto Benajmin Way and head off in the direction of Belconnen Way, and somehwere up there I will find Bunnings Belconnen. I suppose it will be close to 2:50 when I get there.

I intend on being there for anywhere from 30 minutes to an hour, after which I will probably head back to Westfield, have another coffee, and head home. Of course, taking coffee with me in a thermos might be a better idea, but I will make that decision on that morning.

Anyway, it should be a good day!

Comments Disabled To "Bunnings and the 2CC Outside Broadcast"

Humphrey B. Bear is so NOT Australia’s favourite children’s entertainer. He was long ago superseded by The Wiggles, Hi-5 and The Hooley Dooleys. Humphrey belongs in the old era of cheap, crap entertainers like Patsy Biscoe and Mr Squiggle.

Its a hard choice thermos or buy induvidual coffees

I go through the same on night shift.We now have a plunger so i make my own!.

cunninglinguist, in my books Humhrey will always be Australia’s favourtie childrens entertainer…I’m biased, but I much prefer the “old era of cheap, crap entertainers” as you so eloquently put it.

Mind you, I think they were (and still are) fantastic entertainers and great role models.

KPP, looks like it will be individual coffees today, but may be a thermos in future.

I also enjoy my coffee and have made it a must to bring a thermos on my outtings. Even if it’s a quick trip to the store.
I recall forgetting to bring along my thermos back on May 15th 2001 to coles and ended up fainting . It was from a lack of caffine.
Sad but true