The long awaited book on the history and people of Australian radio, Don’t Touch That Dial, Hits ‘n’ Memories Of Australian Radio, has been released and is available exclusively through www.waynemac.com [1]. 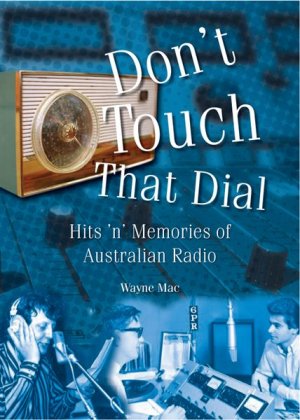 The best way to explain the book is to use the words of Wayne Mac:

Don’t Touch That Dial chronicles Australian radio from the days when teenagers were first seduced by the new sounds of Top 40 pop and DJs in the late 1950s.

It takes you on a journey where radio went from strength to strength on AM, then FM, introducing music, news, personalities, commentators and colourful characters several of whom became household names.

In Don’t Touch That Dial Wayne Mac takes account of an entertainment phenomenon which has touched the lives of generations of Australians.

A celebration of radio and its people in words and pictures.

The foreword is written by legendary radio presenter Bob Rogers, in which he writes about Wayne

Wayne Mac was a keen young radio listener in the ’60s, who turned his passion for radio listening into a successful career as an announcer and program director in the ’70s and ’80s. Documenting this era of our radio history is long overdue. Wayne’s commitment to this task, through several years of meticulous research, has resulted in an authoritative and entertaining read. Few stones are left unturned. I have even been reminded of a few things about me, which I’d forgotten and I had a few laughs along the way.

The book is sorted into sections and chapters:

Wayne has put an awful lot of work, time and dedication into this book, and it shows. Don’t Touch That Dial is a quality book in a limited print run. It is expected that it will increase in value in the years to come.

If you would like more information about Wayne’s book, head on over to his website at www.waynemac.com [1], and keep your ear on the radio as Wayne will be interviewed countless times in the coming weeks.

Sam i have been waiting for this wonderful tribute to the world of amplitude modulation that provides hour of joy to many of us.