Firefox 1.5 was released earlier today, but due to Mozilla moving from mozilla.org to mozilla.com the download link was slightly hidden. Thankfully Mozilla have corrected that in the last few hours (mostly), but I’ll put a link here anyway.

When I started using it I noticed instantly that the menus have changed appearance slightly and now look similar to those seen in Open Office. The tabs are now sortable, RSS/Atom feed notification icon now appears in the address bar rather than the status bar, the options window has been reorganised to make it easier to use, and some dialog boxes have been improved. Another thing I had heard about and checked out for myself is the fact that a lot of the dialog box spawning errors (such as site not found) now bring up an error page, similar to the way Internet Explorer handles it. This is good in some ways and bad in others, but the page looks nice and friendly so overall I’ll say it’s good.

Here is an example of an error page generated when I deliberately misspelled the URL for this site. (Click to enlarge) 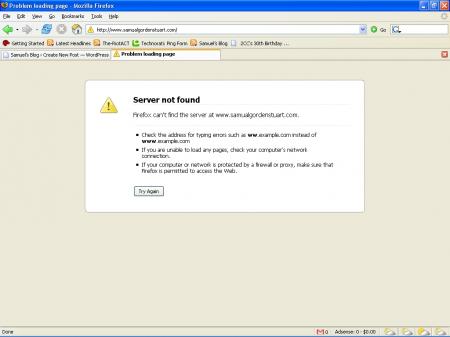 Other notable improvements include

If you haven’t done so already, I strongly suggest that you give Firefox a try, I use it and love it, and it happily and easily imports settings from other browsers.

Comments Disabled To "Firefox 1.5 Is Out"

Faster “back” and “forward” browsing

They’ve been working on that for a long time, as you might have read in [7].

Basically the page is rendered and then the presentation layout is cached – instead of just the source and the images etc.

Overall the UI seems much faster too. Don’t like the new Options dialog though, but I’ll get used to it.

I did notice that a hard refresh of the “Mozilla Start” page took about a quarter of the time it used to. I’ll take some time to get used to the new options dialog too, but it all looks pretty good.

I haven’t read Asa Dotzler’s blog, but I will check it out.