Over the weekend the ACT Government sent out a booklet to each and every household titled Emergencies And The National Capital: A Residents Guide. 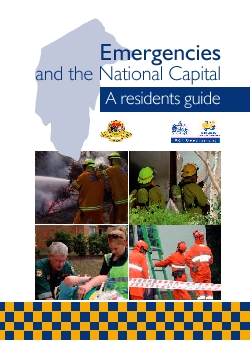 Whilst it is an interesting effort by the government, it is unlikely that you will find anything of use in their quickly, instead you are told objectives, colours and the acts that “underpin” your evacuation.

The guide is clearly written by a public servant as it does lack clarity and plain english, favouring government speak and responsibility briefings. Among my favourite parts of the book are:

The ACT Evacuation Strategy is underpinned by the ACT Emergencies Act 2004 which allows Emergency Services to restrict movement to an area, or direct to people to leave an area due to unacceptable risks to life, property and the environment. The Strategy provides a flexible and adaptable approach to the management of evacuations that is not possible through the development of fixed plans. To achieve this the Strategy has the following components:

Oh goody, that clears that up!

Apparently part of our emergency planning is acknowleging that emergency services may not be able to immediately meet all individual and community needs.
Looks like the chief turnip won’t need to worry about being responsible next bushfire then!

The guide also outlines the colour coded “emergency event” system, namely “Blue: Possible Threat”, “Yellow: Likely Impact”, “Orange: Certain Impact” & “Red: Immediate Impact”. Only Orange and Red will attract an emergency siren being broadcast through local media outlets, and therefore only Orange and Red are going to wake up the usually automated radio and TV stations. This is interesting because the book does say that some people should evactuate during Yellow…but if our radio and TV stations are automated we aren’t going to know about Yellow…so much for advance warning.

Anyway, if you would like to read this rather odd publication for yourself, take a look at http://www.esb.act.gov.au/Emergencies_and_the_National_Capital_-_A_residents_guide.pdf [1] but be careful, those government papragraphs may make your eyes glaze over.

Comments Disabled To "Emergency? The book provides your objectives."

It’s not much chop …… doesn’t even have a number for the police !

It does actually….on page 8, after they’ve already mentioned the Canberra Connect number half a dozen times.

In the unlikely event somebody picks up that book in an emergency they will probably end up ringing Canberra Connect to try and contact the police.

It reminds me of the 2003 bushfire when ABC local radio accidentally added a “1300” to the front of the Canberra Connect number and dozens of people ended up ringing some salesman in Queensland who thought he was going to have a quiet night.