I am deeply saddened by the news that Don Adams (aka Maxwell Smart/Agent 86 from Get Smart) has passed away aged 82.

Get Smart wasn’t one of the TV shows of my era, but its reruns touched me, and it became one of my favourite TV shows.

I had a couple lighthearted stories to run today, but I am going to hold them in honour of Don Adams. May he rest in peace, and be in our hearts always.

Click here to hear the Get Smart theme music [1] 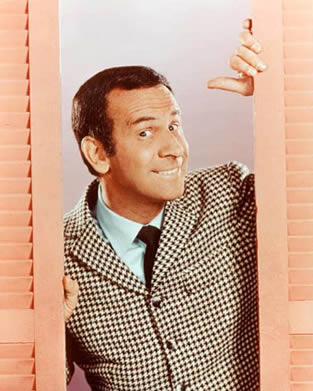 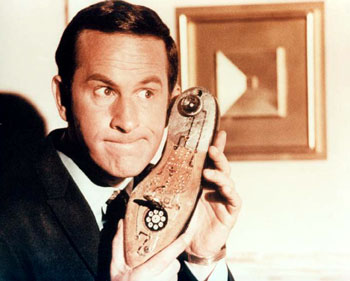 The New York Times has this report

Don Adams, who played Maxwell Smart in the 1960’s sitcom “Get Smart,” combining clipped, decisive diction with appalling, hilarious ineptitude, died on Sunday at a Los Angeles hospital. He was 82.

The cause was a lung infection, his friend and former agent Bruce Tufeld said, according to The Associated Press. Mr. Tufeld said that Mr. Adams broke his hip a year ago and had been in poor health.

Maxwell Smart – in a way, his name was the show’s biggest joke – was a bumbling secret agent for Control, the good guys, who weekly foiled the plans of the evil cabal Kaos for world domination.

Inevitably, Smart’s ham-handed detective style landed him in hot water. Luckily, his faithful and beautiful sidekick, Agent 99 (Barbara Feldon), was as bright as he was dense, and could bail him out. (Smart was Agent 86: bartender’s code for cutting off service to a drunk.)

The original show spoofed the James Bond movies in an innocent, if sophomoric way, and one of its most winning characteristics was the seriousness with which Maxwell Smart again and again did and said things that were really stupid. Several of his lines became popular catchphrases, particularly with young people:

“Would you believe?” (Used when someone did not believe one of Smart’s prevarications and he was about to suggest another.)

“Sorry about that, Chief” (When he reported to his boss, played by Edward Platt, after the inevitable failure.)

But Smart’s charm lay in his utter humanness, the opposite of Bond’s preposterous competence. In an interview with The Saturday Evening Post in 1966, Mr. Adams analyzed Smart: “He’s not superhuman. But he believes in what he does and he wants to do his best.”

His best was rarely good enough. Smart called into work with a dial phone on the sole of his shoe, and often got a wrong number. He wore jet shoes that shot him up, often into the roof. He was so security-minded that he would often swallow secret messages before reading them.

Donald James Yarmy was born on April 13, 1923, in Manhattan. He said changed his last name to that of his first wife, Adelaide Adams, because acting auditions were often done in alphabetical order.

His father ran a few small restaurants in the Bronx. Mr. Adams grew up hating school and playing hooky at the movies. During World War II, he joined the Marines at 16 by lying about his age. On Guadalcanal, he was shot and contracted blackwater fever, fatal 90 percent of the time.

After the war, he drifted into stand-up comedy, always refraining from dirty jokes, presaging the almost ludicrous uprightness of Maxwell Smart. He cut back on nightclub work to support his family with jobs as a restaurant cashier and as a commercial artist.

His first real success as a comic came when he won an Arthur Godfrey “Talent Scouts” competition in 1954, which led to television variety show appearances on “The Steve Allen Show” and elsewhere.

“Get Smart” was originally the brainchild of the producers Dan Melnick and David Susskind, and was then refined by the writers Mel Brooks and Buck Henry. ABC passed on the show, but NBC loved it. The writers first thought of Tom Poston for the Smart role, but Mr. Adams was under contract to NBC.

The program was immediately a success with viewers, though Jack Gould, reviewing the new show in The New York Times, fretted that Mr. Adams was trying too hard to be funny. Mr. Gould, however, heartily approved of Ms. Feldon, fondly recalling her appearances in Revlon’s “Tiger Girl” commercials.

In an interview on NBC’s “Today Show” in 2002, Ms. Feldon gave Mr. Adams credit for much of the show’s success. “When you got in a scene with Don, it was like stepping onto a surfboard, and you just flew over those waves,” she said. “And it was exhilarating.”

Mr. Adams took a much smaller salary when offered a chance for a 33 percent piece of the show. “Get Smart” has been popular in reruns for decades, making for steady annuities.

After “Get Smart,” Mr. Adams did a short-lived comedy series called “The Partners.” After that, he pursued many things, including a very successful voice-over career, speaking for the cartoon character Inspector Gadget. (He was also the voice of Tennessee Tuxedo in the early 1960’s.) He directed and appeared in commercials, and made many guest appearances on shows like “The Love Boat.”

Mr. Adams was married and divorced three times and had seven children. His daughter Cecily Adams, an actress and casting director, died in 2004. His brother, Dick Yarmy, an actor, died in 1992.

Writers have noted disarming similarity between Mr. Adams and Max, his most famous character. The Saturday Evening Post told a story of Mr. Adams looking for money in his pocket to tip a young man who had parked his car. He had no change, no bill he thought was small enough and could find nothing when he rummaged in his glove compartment.

“And so motorists began sounding their horns, the kid shifted from foot to foot and an audience gathered,” the magazine wrote. “It was pure Don Adams. And pure Maxwell Smart.”

I find that hard to believe…50?

While I was making a cup of coffee today, I remembered one of my favourite Get Smart episodes where Kaos placed a giant fan at the north pole which sent a cold wave (We have heat waves…what’s wrong with a cold wave?) across the US. Naturally it was up to Max and 99 to turn off the giant fan, which from memory was on top of an igloo.