This afternoon at work, we were discussing pie’s (the charming Indian boss who had never heard that word thought we were talking about “pine”, which really isn’t as tasty and often leads to tooth damage), and after following a link to a pie recipe, I noticed an ad telling me I had won something. Normally, I would not click on one of these ads, but on this occasion, I quite simply couldn’t help myself. 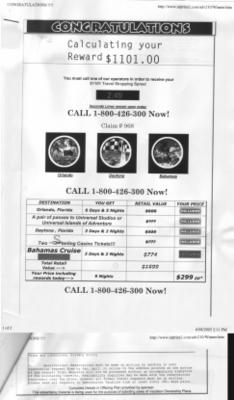 [1]After clicking the link, I was presented with a page that had a strange little animation “calculating” my reward, which turned out to be $1101, the page also presented me with a timer telling me I had three minutes to call the number on the screen, which just happened to be an Australian free-call number, I printed the page (it had the claim number on it) and went next door to the office, which has the phone.

Upon dialing this free call number, I was transferred (at the advertising company’s cost) to a US call centre indentifying themselves as the “prize claim hotline” or something.

I told the girl who answered the phone that I had just won $1101 and she seemed to become excited (I don’t think many people ever ring the number, maybe she was happy to hear another person) and she proceeded to ask me for my claim number, which I gave her. She then went and asked me a few strange, although suprisingly understandable, questions about my holiday habits, how long has it been since my last holiday, what credit card to I prefer to use etc. She also asked for my name and phone number (office phone).

She then went on to tell me about this prize I had won, she was pretty much elaborating on what I had on my printout, a holiday to various places, I didn’t really care whether I was going to see a beach near a rollercoaster or not, but I pretended to be interested. She went on and on and on and on and on, until eventually she made the scam a little bit clearer, I was getting this fantastic holiday, I had to take at least one other person with me (which makes the per person cost seem much lower), and the third & fourth person is free. The total cost of this amazing holiday was a mere $1699. Naturally I had my $1101 discount, so it was only going to cost me $598, on credit card NOW and I can take my holiday whenever I want for the next 18 months.

During this entire performance, she was telling me information I was supposed to write down, names of places I could visit, and her name which, just on the off chance she is real and wants to google herself or you speak to her, was Shirley Mathis

She then had a recap of this amazing holiday, and then wanted my email address, she didn’t say why she wanted it, so I asked her:
“Are you going to spam me?”
to which she replied
“I’m sorry, I couldn’t hear you”
I asked her a second time and she froze, after a silence of about five seconds she said she was transferring me to her supervisor who “would be able to handle my enquiry better”.

I placed them on mute temporarily while I updated my surrounding co-workers on the status of this bizarre call (it was originally on speakerphone, but Shirley couldn’t hear me very well, so I picked up the handset), after a brief time on hold, an American man who never identified himself answered the phone and started blabbering more repeated details of this holiday before asking me for my email address, I asked him whether he was going to spam me, to which he replied
“I’m not going to stand on you!”
so then I said
“No, Spam…SSSS-PAAAAM”
He paused, and seemingly went into shock, and after about five seconds said
“Oh, no, no, no (chuckle) we just want to send you a verification code so you can see your prize again.”

He didn’t bother asking for my email address again, and instead went on to a postal address, I started with a number, and had to spell it out to him, then I had to spell out the worded part of the postal address….twice, at which point one of my co-workers burst out laughing and rolled on the floor for a while, which I told the man on the phone, he seemed to ignore that, and as soon as we were finished with that he went and told me (for the third time) that once he was finished with me he would put me through to a tape recording from the legal department which would ensure that I knew what I was receiving (as if they hadn’t told me enough times already). I was beginning to suspect that he was a tape recording himself.

He eventually got to the “I want your credit card details” section of the conversation, and I made an excuse, I told him I had left my credit card at home today, and he said that people usually tell him that when they don’t believe the holiday deal. He suggested that I should call home
“Put me on hold and call home!”
I couldn’t argue with that logic, so I said I was putting him on hold, couldn’t find the hold button and pressed mute instead, I obviously wasn’t going to ring home as I had no intention of giving them my financial details, during the time I had them on mute I discussed the progress of the call with my co-workers and heard Shirley saying something to her supervisor about me, which sounded derogatory, it also sounded like she was saying something along the lines of “I think we’ve got this one”. I’ve always wanted to listen in on people who are on hold, it can prove to be entertaining, my wish came true today.

I waited a few more seconds before taking them off of the muted hold, and continued to play their game as if I hadn’t heard anything.
Samuel: Are you still there?
Shirley: Yes, I’m here
Samuel: Oh, ok, your supervisor said I should ring home to get my credit card details
Shirley: I know, I was standing right here

At this stage I was thinking “But you said you were transferring me, how many other people are listening to this, perhaps you are in a small office and the other call centre voices are just a recording.”

The call continued
Samuel: Well, I tried, but nobody is home.

And the banter went on for a but longer, she started to sound disappointed, and told me about my holiday again, what came next really caught me off guard.

Shirley: You should borrow your bosses credit card…he can take it out of your pay cheque!
Samuel: (Laughter) I suppose, but he isn’t here right now
He was actually less than four metres away at his desk listening to me talking, but I wanted to finish this call politely, maybe they would let me have the bogus holiday to secure the scam…but alas, Shirley reached the stage where

And that pretty much ended the call. I went back to the computer to find the three minute timer had changed to “Call Now”, I refreshed the page, and got the same claim number, the same prize, and another three minutes to call.

The call itself lasted for 24 minutes and 17 seconds, all of which was paid for by these lovely scammers.

Now if you have some spare time, and want to make those scammers pay, give Shirley and her supervisor a call, the more people the better, just use the details from my printout.

Ah yes, the fun that can come from those internet ads.