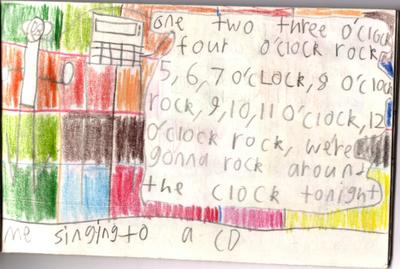 [1]As time goes by, these images are becoming more and more abstract, and more and more faint, in this one I didn’t even have a working pen to use when I was drawing it.

Today’s first image sees Samuel singing the start of “Rock Around The Clock”, which really has nothing to do with the goldfields, but he was obviously enjoying himself.

According to the caption, Samuel is “singing to a CD”, which is obviously another one of those bits os futuristic technology for 1857. 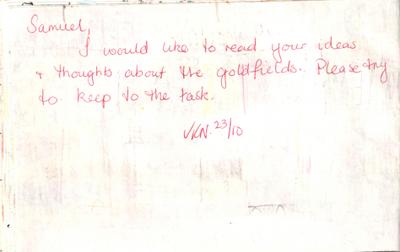 [2]
On this occasion, Mrs Brophy wasn’t marking the diaries, it was Mrs Nash, and she was quite annoyed at the lack of goldfield related entires, she was often annoyed about something, but she was especially unimpressed by this.
“Samuel, I would like to read your ideas & thoughts about the goldfields. Please try to keep to the task.”

I didn’t notice her comments right away, which will probably be evident tommorow.

We are now 4 episodes away from finishing the Samuel In Dolgnwot series.

Clicking on the pictures will show a larger version, you can also find them on the photo gallery [3].