Before I get angry emails asking me why I haven’t produced today’s episode of Samuel In Dolgnwot, here it is. 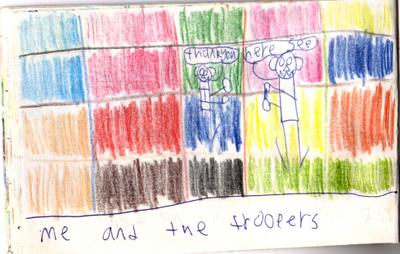 [1]In today’s episode, Samuel gets harrassed by about five troopers all asking for the same documentation.

As part of the gold game, a certain number of people chose to be troopers instead of gold diggers for half of the time, they had the job of going around and asking to see certain documents which showed if you had been shopping or kept your digging licence up-to-date, or been cheating.

On this particular day, five troopers visited Samuel (and most of the other gold diggers) to check their shopping documents, this sparked a number of complaints by the gold diggers about the troopers.