I don’t think I’ve ever discussed this here, so I’ll start the story from the beginning.

Back in the February 2005 edition of Australian PC User Magazine there was an article about networking for small business which appeared to be recommending various Windows servers and seemingly expensive ADSL router/switch devices.

Whilst there was nothing wrong with this per se, it did seem odd that the aim of the article was to save small business money, but was recommending various relatively expensive options. This prompted me to write a letter.

Hi,
In your February edition, you had an article which discussed choosing
equipment for a small business network. In it, you appear to recommend
broadband routers and Windows Servers.
I have an alternative suggestion for businesses that are a bit more
conservative with their money.
Forget the $150+ broadband router, dig out an old PC, throw a couple
of network cards in it, get a cheap 1 port broadband modem, and put a
copy of SmoothWall Express 2.0 firewall on the PC from
www.smoothwall.org. SmoothWall, being a standalone Linux distro, will
protect your network with a minimal amount of setup, and provide a web
proxy, DHCP server, etc for free.
As for the file/print server, try ClarkConnect from
www.clarkconnect.org, the Home Edition is free (and can be used
wherever you want), and provides a windows file server (samba) plus
mail server, web server and more, again for free as it is another
Linux distro. CC also requires a minimal amount of setup.

If you consider that a broadband router with enough ports for your
entire network can cost over $200 and that Windows servers retail for
$900+ and have rigid user restrictions (more users costs more),
meaning a total cost of over $1000, and that my suggestion would cost
just enough for a couple old PCs, and an ADSL modem (my D-Link DSL300G
cost under $90 from citysoftware.com.au), a total of under $300, less
if you already have the old PCs, I know which option I would choose.

Incidentally, I run SmoothWall and ClarkConnect at home, and it runs
without a hitch. And these free products can be modified, and usually
have a lot of user provided addons that extend their functionality.

When I picked up the March edition of PC User I started reading it and noticed that something looked vaguely familiar, and after looking at it a little while longer, realised that they had published my letter as the “Letter of the month”, albeit in a cut down form. 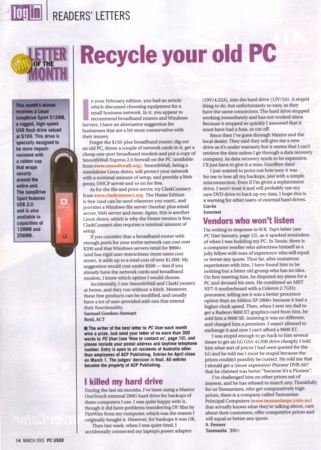 Needless to say I was rather pleased with myself and eagerly awaited the arrival of my prize.

A month passed, the next issue of PC User arrived in the mail, and I still didn’t have my flash drive, I decided to phone PC User magazine. I phoned them numerous times over the next few weeks, always being informed that “The supplier had difficulties” and I should have my flash drive soon.

More time passed, and with the Linux conference and other things, the flash drive slipped my mind. Eventually, on May 31, I sent them the following email…needless to say, I was masking my frustration with sarcasm.

Hi,
You might remember me from the March 2005 edition of PC User, I wrote a letter about free software and old computers being useful for servers. My letter won “Letter Of The Month” and my prize was a Lexar JumpDrive Sport 512MB USB flash drive.

I waited a little while thinking that it might turn up in the mail, and after waiting a few weeks and receiving nothing I gave your offic a call, I was informed that you were waiting for the flash drive to arrive from the supplier, so I waited a checked again a few weeks later, you were still waiting, a few weeks later you were still waiting and I was assured that it would come soon. I’ll admit, I’ve been busy, and I had forgotten to check on the progress of my flash drive, and to this day I still haven’t received it, in fact the only thing that reminded me was that I received my copy of PC User in the mail today.

I would also imagine that after all this time, my details may have gone missing, so I thought I should probably give them to you again:
Samuel Gordon-Stewart
(Address Hidden)

And naturally my email address: smoothwallsamuel@gmail.com

To my surprise, I got a reply the very next day

When did you speak to us?

It was a rather dismal reply, I agree…I replied to it

But with school work and being involved with a Linux conference it all just slipped my mind.

I never heard back from the unnamed person at “ACP Tech Titles”, and after another period of time in which it all slipped my mind, I put in another phone call, however the people I would have spoken to were “unavailable” and I never got to speak to them.

A little bit more time passed, and eventually (on July 25) I got an email out-of-the-blue from Anna Raciti, deputy editor of PC User Magazine

Our sincerest apologies for the extremely long delay you’ve had to endure on this. You have been more than patient with us and we really do appreciate your understanding.

Today we’re sending your prize and a few extra goodies in an attempt to make up for the hassle and inconvenience you’ve had to endure.

Please accept the prize and the extras with our sincere apologies.

If you have any more problems, please don’t hesitate to write back to me and let me know.

Again, thank you for your patience and sorry for the extensive delay,

To my absolute amazement, she had replied to my email from May 31, indicating that my email had been circulating for quite a while.

After a little bit more time, my prize and extra goodies arrived on August 16. It turns out that PC User eventually just went to an officeworks store and bought a flash drive off the shelf, they also packed in some other goodies…here is a photo: 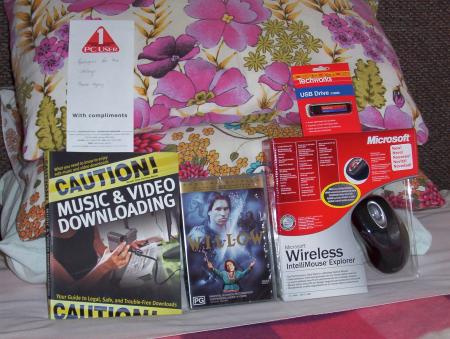 Well, I just wish to thank Anna Raciti for finally sorting it out. It was an interesting adventure, and I’m glad it has finally come to an end.