Only Canberra could produce a headline like that, and it is all true, even if slightly exagerated. 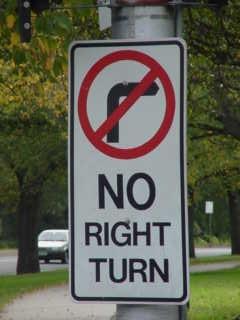 [1]This afternoon on my way into Civic I noticed somebody staring at a No Right Turn sign, which was a rather unusual sight. There didn’t appear to be anything unusual about the sign…maybe they hadn’t seen one before.

Also this afternoon, an explosion at the Australian National University.
In the Research School Of Chemistry, probably the result of an experimental accident.

ABC Online [2] says “A laboratory explosion blew out three windows and sparked a fire at the Australian National University’s (ANU) science building this afternoon. The fire is understood to have burned through the roof of the building. It is not clear what caused the explosion, which hit the third floor of the science building at 1:45pm AEST. Ambulance officers assessed four people from nearby buildings but they did not need treatment. The fire brigade says smoke from the blaze was non-toxic. Investigations into the cause are under way, as the clean-up continues.”

This comes just two days after a suspicious package was found at the Jolimont Centre in Civic, sparking a closure of some roads, including Nourthbourne Ave. The police belw up this bag to destroy it, I’m not sure how safe this is when they don’t know what is in the bag, but it turned out to be a forgotten bag of clothing.