Mr. Carr has also announced that he has no plans to continue into federal politics. 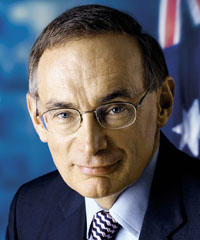 [1]I have always seen Bob Carr as being a sensible and level headed man, a man of integrity and morals, a gentleman and a leader, and a man of great intellect. New South Wales will be poorer without this great man as premier, and as much as I would like to think it will run smoothly without him, I very much doubt it. One of his ministers is likely to take over as premier, which will be interesting, and perhaps finally prove that City Rail isn’t Mr. Carr’s fault.

If Mr. Carr does stay out of Federal politics I think it will be a great loss. I would have liked to see him as Prime Minister one day, unfortunately it appears that will not be the case.

Regardless of what Bob Carr does, he has lead a very full, interesting, rewarding, challenging and hopefully enjoyable career and deserves to be able to choose his own terms of retirement. To survive as long as he has in politics and then to be able to make up your own mind about when to call it a day is an incredible achievement, and one that he definitely deserves.

The Honourable Bob Carr receives a very special award which is rarely presented.

Congratulations on your many fine achievements, and may your retirement be as fulfilling and rewarding as your incredible career has been.