In today’s episode of Samuel In Dolgnwot, you can see Samuel writing or drawing in his diary. 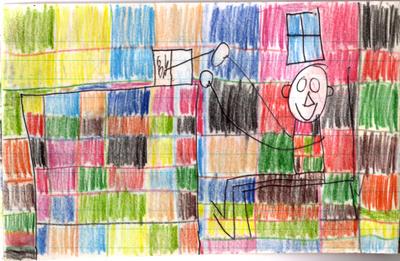 [1]
It might be worthwhile explaining how the Patchwork Art actually works.

Basically, I had 12 colour pencils and a pen. Firstly I drew the objects with a pen, in this case it was the person, the chair, the table & the window. Then I had a “Colour Draw” where the colour the colour pencils were arranged in a random order, then I coloured in the background with the pencils in the order that they were drawn. Firstly I drew a set of vertical lines with the colour pencils and then a set of horizontal lines with the pencils. For this picture it appears that the colour draw was “Yellow, Light Blue, Cream, Dark Blue, Purple, Pink, Black, Red, Dark Green, Brown, Orange, Light Green” Then the resulting grid was filled in with the colours in a clockwise direction, if the line between the current grid square and the next grid square was the same colour as the one I was using then it got to “spread” into the next square. The objects were usually coloured in after this using the same method (The pencils were not reordered however) and in this case it would appear that I decided to make the window light blue.

I should probably make an animation of this system to make it a bit clearer.