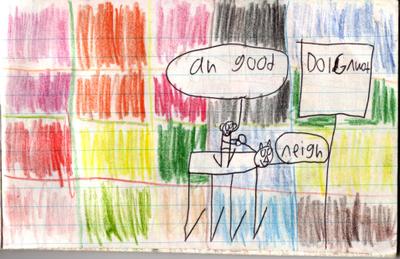 [1]Today’s episode of Samuel In Dolgnwot sees Samuel arriving in Dolgnwot on his horse who is saying “Neigh”, Samuel is pleased to arrive as well, saying “Ah good”.

Interestingly, this picture was actually the first picture drawn and was the original start of the series, however the pilot episode’s plot was created and a picture needed to be drawn for it.

The origin of the name Dolgnwot is an interesting story. At the beginning of the “Gold Game” unit of work, the class was asked for suggestion for the name of the town, one of the suggestions was “Gold Town” backwards, which was taken as “Town Gold” and then the letters were reversed as well, but the teacher made a mistake that nobody realised and so “Dolgnwot” (aka, “Town Glod” backwards) became the name of the town in which the unit of work was to take place.