It is said that Canberra is a well planned city, this may be the case, but it does appear to have gone downhill lately.

Yesterday I had the pleasure of taking Nattie for a walkies to the GPO in Civic and then for an extended walk home which went up city hill and back through Glebe Park.

Allow me to inform you of the three places along the walk that annoyed me to some extent. 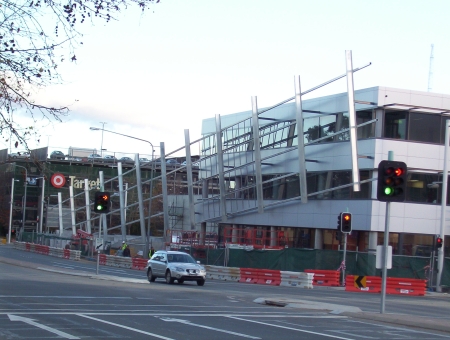 [1]
Firstly, we have one of the latest monstrosities to be built in Canberra.

Whatever happened to sensible buildings, why do they all have to have these bizarre “artworks” in front or on top of them. That weird metal structure doesn’t help the building stand up (although if it does then I hope I never have to go inside), it probably increased the cost of the building by some largish amount, and ultimately it looks completely and utterly ridiculous…..I guess it is in line with the exceptional ability some people have for designing and building the most ugly apartment buildings, but it is turning this beautiful garden city of ours into an eye-sore. If you want to see this strange structure for yourself, it is on the corner Bullumbir Street and Petrie Street, Civic. 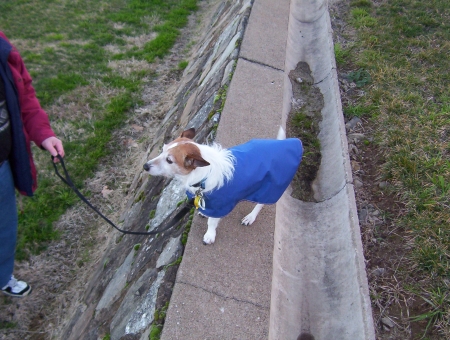 [2]
The second piece of “well thought out” nonsense is up on City Hill. If you travel between Nourthbourne Avenue and Commonwealth Avenue in a southbound direction then you have probably seen this and don’t even notice. That carpark on the left hand side of Vernon Circle southbound is a good little stop off point for tourists who want to see the lovely part of Canberra (and the scenic views) that comprise city hill. Unfortunately, the spot directly opposite the carpark (assuming you can cross the road without being run over) where tourists would be likely to embark on the stroll up city hill is a mini cliff, which effectively makes tourists (and others) have a large stretch of the legs, or walk along the edge of the busy road around to Nourthbourne Avenue where such obstacles don’t exist. Why wasn’t this area brought down to road level like the rest of City Hill?
Needless to say, Queen Dog-Dog Nattie the First was not impressed about this mini cliff.

This was unfortunately, the last photo I was able to take before the batteries died, so you will have to see the other bit of urban planning for yourself.

The third strange thing was in Glebe Park in the location where the playground equipment used to be (many moons ago). I am aware that this “artwork” has been in this particular location for many a year, but it is part of the very annoying habit the ACT Government have of putting Valuable Public Monstrosities in all locations that seem semi-vacant. Whilst they will be happy to inform you that it is “artwork”, I can assure you that these eye-sores are diverting precious funding from our hospitals and schools. About the only thing these VPMs are good for are canine liquid byproducts….Something Nattie would be proud to attest to. She is, after all, the “Twilight Dog” (Twilight being the name of a VPB that glows on Ainslie Avenue at taxpayer expense.)