Wow, what a day…
Firstly we had the Conference Opening…Tux came in, and brought along Linus and his twin (who is also called Linus), bizzarely, Linus & Linus haven’t been doing much except standing about watching food all day. 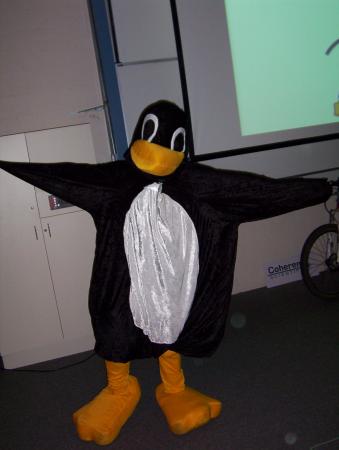 [1]
The organisers have arranged some great prizes, each day during the keynote talk they will give away an IBM Thinkpad, Tux almost ran away with one. (And you may now attend the keynotes…I’m not overly concerend about the laptops anymore…keep reading to find out why…hint, it has something to do with the title)

Recovering from HDD disasters was quite interesting….unfortunately due to the late night I’ve had recently, I almost fell asleep during it…I found a cure though…COFFEE

With myself awake I was able to concentrate on important stuff like what food was available…and something else…ummmmm….hmmmmmm…ah, that’s right, the seminars…nearly forgot about them…

I discovered something about automatic doors today. You can go out, but you ain’t coming back in…unless the door is nice and feels like opening the one you aren’t standing in front of.

The other seminar I attended today was the Building User Interfaces With Video And 3D Graphics For Fun And Profit…some of it went straight over the top of my head, but all in all, it was an excellent seminar. Anyway, at the end of each seminar, one lucky person will win a 1GB flash drive, Wayne (the speaker for the seminar) couldn’t decide who to give the flash drive to, so it was a game of Heads and Tails, something I’ve never played before…well, beginners luck it was, I won the flash drive 😀

One important bit of news…I can’t get the microphone audio from my seminar for about a month…so if you are good with audio and want to have a go at cleaning up my audio, let me know.

Photos from this can be found at http://goggo.dyndns.org/gallery/Linux-Conf-Au-2005?page=3 [2]